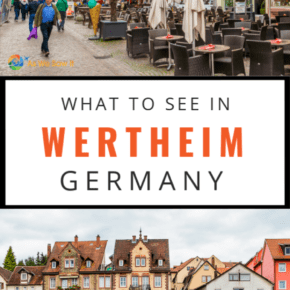 When we received our Viking Daily cruise schedule last night, I was, to say the least, underwhelmed by today’s itinerary. Wertheim was our final port on the Main Canal and our only stop for the day. Worse, thanks to the lock schedule, we would only be in town for about three hours.

We awoke to our second day of dreary skies in a row, and even before we opened the drapes I could sense that the day would be chilly. Sure enough, the window glass was cold, promising we’d need every bit of the warm clothing we had packed.

Who knew Europe could be this wintry in June?

But why Wertheim am Main?

Not having heard of the town before we saw the itinerary, I wasn’t all too sure whether Wertheim am Main was visit-worthy. I couldn’t help but wonder if perhaps Viking might have simply chosen it just so we would have one last stop before leaving the Main Canal. We still had 156 kilometers to sail until we entered the Danube …

But then I found out that the town has castle ruins and is known for Franconian wine. And we’d had a glass blower on board the night before, because Wertheim is known for its glassmaking.

Wertheim glassmaking is so renowned that many passengers decided to skip the included walking tour. They preferred to spend their time browsing and shopping in its many glass shops.

I’m not a shopper, but when I learned that the Brothers Grimm had based Snow White on a real local woman, I briefly toyed with the idea of dragging Dan into a shop so we could buy a souvenir mirror.

Ultimately, curiosity about what to do in town won out. It’s nice having a local guide point out the things that make Wertheim unique. We’d visit the glass shops afterward.

So many things to see in Wertheim, so little time

As everyone gathered in the lobby, Dewi announced an adjusted “Back on Board time.” So much for having three hours in town. Thanks to lock schedules, a delayed docking, and another lock appointment later that day, we’d have to be back at 12:30.

Still, no one seemed to mind. We all understood that river cruise itineraries often have to be adjusted due to unforeseen circumstances. And so off we all went, to make the most of the time we did have.

Except for one thing. Wertheim was so picturesque that we completely forgot about the glass museum and that souvenir mirror.

Burg Wertheim’s old town sits smack dab on a tiny point of land at the spot where the Tauber flows into the Main River. Captain Oliver couldn’t have docked any closer to Burg Wertheim if he had tried. I laughed to myself: For sure, the ship will be easy to find when we return!

Thanks to the surrounding mountains and the proximity of the two rivers, Wertheim has endured repeated floods. Many times, the waters had risen to nearly apocalyptic proportions. Just as we had seen in Passau, many of the old town’s structures have markers that show just how high the water has been over the centuries. Our guide took us to one of them.

How Wertheim am Main deals with flooding

To deal with the floods, Wertheim has made a few adjustments:

Wertheim’s historic market square is surrounded by well-preserved half-timbered buildings. Many have survived from the 16th century.

One place that will never experience a flood is the impressive Wertheim Castle (Burg Wertheim). It sits high on the hill overlooking the town. Dating from the 12th century It was owned by the ruling family and repeatedly expanded during the 15th – 17th centuries.

The castle fortress was destroyed during the Thirty Years’ War, but not by an enemy. An irresponsible 9-year-old girl fell asleep and forgot to extinguish her candle. It would have been easy to extinguish a mere fire, but they were storing gunpowder in the castle at the time…

The 13th-century Pointed Tower (Spitzer Turm) might also be called the Leaning Tower of Wertheim; 800 years of flooding having weakened its foundations.

Originally built as a lookout tower, it later served as a prison for townspeople who didn’t behave, from drunkards to shrews. Apparently, back in the middle ages, bickering women were kept in the tower together until they learned to get along.

Wertheim has long been famous for its glass works. The production of glassware and beaded jewelry started in medieval times and continues today with industrial fiberglass and scientific glass.

Glasmuseum Wertheim, as it is locally known, is the only glass museum in the area. It contains an extensive collection of glass objects, from ancient luxury items to early industrial glass. It’s so large, in fact, that they needed two buildings to display everything.

The museum offers a daily glass blowing presentation, as well as special exhibits throughout the year. Some examples are: Glass pearl exhibit, glass for industry and science, and Christmas items during the advent season.

After last night’s glass blowing presentation by Hans Ittig, many passengers decided to see what his Wertheim shop had to offer. Bon-Apart is an old half-timbered house just off the market square. Originally built for a knight named Zobel in 1520, it looks like a cute place. At least from the outside.

I would have liked to visit a glass shop, but we lost track of time. Exploring narrow, winding streets and losing oneself in the medieval ambiance is loads of fun. I regretted it later that afternoon, though. We heard a lot of people discussing the wonderful purchases that would be awaiting them when they got home.

Sigh. Too many things to do in Wertheim, too little time.

German teatime, back on board

As I’ve mentioned in earlier stories, it’s nice to have a balance of things to do on a cruise, like tours, free time and on-board activities. Though the afternoon was mostly unplanned, we did have the option to join in a “German teatime” in the lounge at 3:30.

This was nothing like a “proper English tea,” believe me! It was more of a local foods presentation. We learned how to prepare Rudesheimer Coffee (from a nearby town). Just as when they had shown us how to prepare Apple Strudel, they drafted passengers to participate in the presentation.

We got a lot of laughs out of it, too.

As we watched, the crew handed out cups of the spiked coffee so we could try it ourselves. Afterwards, we enjoyed a more traditional selection of cookies and tea on the Aquavit Terrace.

After dinner, the passengers gathered in the Lounge for a “music quiz.” Haha – what a misnomer. Actually, it was more of a music trivia contest. Michael, the ship’s pianist, played a short part of a song, and then our Program Director, Dewi, challenged us with a question related to the music.

Questions ranged from “where did this song take place?” to “What were the artists’ first names?” and more. Our group of four (Dan and me, plus two lovely English ladies we’d become friends with) got all but two correct … but it wasn’t enough to win the prize: a bottle of sparkling wine.

No serious worries, though. There will be plenty of wine on tomorrow’s itinerary.

ALSO READ:
One Day in the Rhine Valley: Cruising, Castles and Wine

If you’re planning your own visit, these sites are super useful.

12 thoughts on “One Day in Wertheim am Main, Germany”