One Day in Ravenna (Mosaics + More Things to Do)

It’s a shame that so few people have heard of Ravenna Italy or its exquisite mosaics. They’re missing out on a real treat. Any visit to Italy deserves at least one day in Ravenna, and it’s easy to do because this lovely city is easy to reach by train from Venice, Bologna, and Florence.

Ravenna is worth visiting if you’re interested in mosaics, history, or architecture. Plus, the city’s inexpensive lodgings and eateries provide excellent value for travelers on a budget.

Table of Contents show
A bit of Ravenna history (who knew?)
What are the 8 UNESCO sites in Ravenna?
One day in Ravenna, Italy
Mausoleum of Galla Placidia
Arian Baptistery
Basilica of Sant’Apollinare Nuovo
Basilica of San Vitale
How to make those Ravenna mosaic tiles
And there was piadina. And it was good.
The tomb of Dante Alighieri
Museo TAMO (Tutta l’Avventura del Mosaico)
Must. Visit. Plan your day trip to Ravenna Italy
Want to read this later? Save it to Pinterest!

A bit of Ravenna history (who knew?)

Back in Roman times, Ravenna went by the name of Classe. It served as an imperial port for the empire’s massive naval fleet and was even—for a brief time—the capital of eastern Rome (from 402 until the empire collapsed in 476).

Ravenna was the capital of the Ostragoth empire until 540, when the Byzantine emperor Justinian re-conquered the city and made Ravenna the westernmost pillar of the Holy Roman Empire.

In a nutshell, this explains why there are so many churches and Istanbul-quality mosaics here.

What are the 8 UNESCO sites in Ravenna?

Eight early Christian churches/monuments in Ravenna qualify as UNESCO sites. They include:

We couldn’t visit every one of the sites, because we were only in Ravenna for one day. But no matter. The mosaics we did manage to see were exquisite. Jaw-dropping, even.

Each was done with painstaking care and attention to detail. What looks like a lovely collection of tiny, bright tiles on close inspection will, when you step back, transform into a vivid image of a sea voyage, an image of Jesus, or a choir of angels.

One day in Ravenna, Italy

Ravenna has a lot to offer visitors in addition to the world-famous mosaics. Art lovers will enjoy Ravenna’s many museums and art galleries, while foodies will enjoy the city’s many restaurants, cafes, and gelaterias.

The city is home to several important historical sites, including the Mausoleum of Galla Placidia, Sant’Apollinare Nuovo, and San Vitale.

So whether you’re interested in history, art, food, or simply want to enjoy the sights and sounds of this vibrant city, Ravenna is sure to please.

Here are the best things to see and do in Ravenna in one day.

According to UNESCO, the Mausoleum of Galla Placidia is “the earliest and best preserved of all mosaic monuments, and at the same time one of the most artistically perfect.”

I don’t know how they could have chosen between them. Every one of the sites is just as artistically perfect, in my opinion.

The mausoleum is illuminated by luminous alabaster window panels, which give the artwork an ethereal glow.

Galla Placidia, daughter of Roman Emperor Theodosius I, was a well-known patron of the arts. Legend has it that she had this built as a mausoleum for her and her family. Three sarcophagi are housed there.

While no one is 100% certain, one sarcophagus is said to he hers, a second belongs to her husband, Emperor Constantius III, and the third holds the remains of either Galla’s son, Emperor Valentinian III, (Galla’s son) or of Emperor Honorius, her brother.

Theodoric the Great, king of the Ostrogoths, erected the Arian Baptistery as a political move. Two influential groups in his empire, the Goths (Arians) and the Latins (Orthodox), had different views of Christ and only one of them had a baptistery.

To keep the peace, Theodoric built this baptistery “of the Arians” in order to distinguish it from the Baptistery of Neon (of the Orthodox) that had been built a century before.

The ceiling mosaic was remarkable. Love those gold tiles!

The same king who built the Arian Baptistry, Theodoric the Great, built this as his chapel and dedicated it to Christ the Redeemer in 504.

The basilica earned its present name in the 800s, when some relics from Saint Appolinaris were transferred here. They say Pope Gregory the Great ordered that all the mosaics in the church be blackened. He felt that their “golden glory” distracted worshipers from their prayers.

We had no clue what we were getting into when we walked through its doors, but oh, I’m glad we did.

The Basilica of San Vitale is the best known and most popular of UNESCO’s eight sites. Its Byzantine mosaics are the largest and best preserved outside of Constantinople, so if you don’t want to go to Turkey, you need to be here.

Oh. My. Gosh. Wherever we looked, we saw mosaics. They were everywhere, and I mean everywhere. They were on the floors, on the walls, on the arches, and on the ceilings!

And they were all so exquisite, it was almost overwhelming. I could have stared at them for hours.

Dan had a really hard time knowing where to focus his camera as well.

And not only mosaics, but fabulous paintings to enjoy.

How to make those Ravenna mosaic tiles

If you’re interested in how they created these incredible works of art, you’ll enjoy this fascinating 3-minute video:

And there was piadina. And it was good.

Ah, piadina. Heaven on a plate. Our lunch was another highlight of our day in Ravenna and we discovered it through a tip from a local. Piadina is a thin, unleavened Italian flatbread that is typical of the region (Emilia-Romagna). It is usually made with white flour, olive oil, salt and water … but not all of them are so you have to ask. We had to make sure ours were vegetarian-friendly because some restaurants make it with lard. Ew.

Piadine are usually made on-the-spot and served immediately. The warm, crispy rounds are filled to order. Choose a variety of cheeses, meats and/or vegetables, or get it with sweet fillings such as jam or Nutella.

The tomb of Dante Alighieri

Dante Alighieri was a legendary Italian poet who is credited for having made the Tuscan dialect Italy’s national language. He’s also well known for having written the Divine Comedy, which details Dante’s journey from Hell (the Inferno), through Purgatory and finally to Paradise.

Dante was born and lived in Florence for most of his life, but he offended some highly influential nobles. As a result, he was exiled to Ravenna, where he eventually died and was buried.

If you visit Florence, you need to know that the tomb of Dante is really just a memorial. It’s a long and interesting story, but Dante’s remains are still in Ravenna, and you can visit his simple marble tomb while you’re in town

TAMO Museum is all about the history of mosaics, from ancient to present-day. Housed inside the beautiful 14th-century Church of S. Nicolò, it offers a variety of interactive exhibits and videos that even older children would enjoy.

There is also a section of original mosaic floors. They’ve installed a metal boardwalk, so you can view the area without damaging anything. Click here for hours.

Must. Visit. Plan your day trip to Ravenna Italy

Dan tried, he really did, but photos just can’t do justice to the mosaics in Ravenna. I am sure you’ll agree if you get an opportunity to see them yourself. Ravenna’s tourism website can be found HERE, but to be honest nothing can replace a good Italy travel guide book.

Please go through our Ravenna photo gallery and let us know what you think. We have photos of the city itself, the mosaic museum, Dante’s Tomb, some pretty churches, and of course, a whole lot more shots of those mosaics. 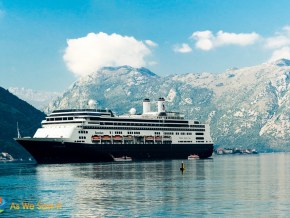 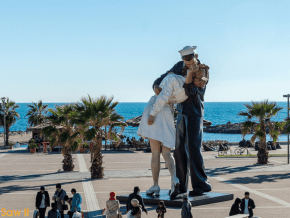 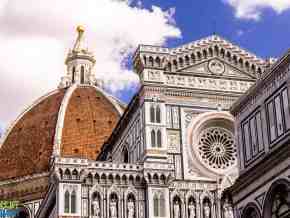