Tips on Celebrating Carnival in Panama

However you spell it, Carnival or Carnaval is not just a Brazilian holiday or only celebrated in Rio. Carnival is a mega-holiday throughout Latin America and the Caribbean, and it’s even celebrated in Europe.

No matter where you go or which country you find it in, celebrating Carnival is a joyous, festive event. So hurray, you don’t have to fly to Brazil to experience it!

Carnaval always takes place over the four to five days leading up to Ash Wednesday. In 2020, Panama Carnival will begin on Saturday, the 22nd of February, and it will end on Tuesday, February 25.

Never mind that it’s not an official holiday for the country. Many businesses in Panama shut down for the entire time, and the the entire country lets loose to party hearty. People all over Panama gather to drink, eat, and party until the sun comes up for 4 days.

The word chaos comes to mind. The only thing in America that’s even slightly similar is in New Orleans, where it’s called Mardi Gras.

The first Carnival in Panama took place in colonial times, when individuals dressed as king and queen of Spain, conquering soldiers, slaves and Indians and then proceeded along a road while simulating battles. When they revived Carnival in the early 1900s, they added royal attendants, held a parade, and shot off fireworks.

You might like to read more about the history of Carnival in Panama in our related article. It’s pretty interesting.

Where to party for Carnival in Panama – according to locals

We’d been in Bocas del Toro for our first Carnival in Panama, so the following year we asked our Panamanian friends where we should celebrate it. Everything we had read said that some of the biggest parties are in the country’s interior, and we had no clue where to go.

Everyone seemed to agree that the town of Las Tablas hosts the country’s top Carnival destination. That sounded exciting … but when we tried to get more details about actually attending, they would discourage us. We heard phrases like “but it’s so big,” “it’s only for Panamanians who are used to that sort of thing,” or “but you need to be careful.”

During Carnival, Las Tablas is wall-to-wall people, which means lots of potential for pickpockets. There’s a lot of heavy drinking during the festival  as well, so you have to be prepared for crowds of intoxicated people.

The journey from Panama City to Las Tablas normally takes about 4 to 5 hours, but this time of year it’s longer. If you want to attend, you’ll also need to reserve your hotel months ahead of time.

Given all that, we finally ruled out Las Tablas and decided to just experience a Panama City carnival instead. There would be plenty to see and do there, as well.

ⓘ TIP: No matter where you decide to celebrate Carnival in Panama, wear comfortable walking shoes that will protect your toes. Seriously, some people don’t pay attention to where they step.

Highlights of Panama Carnival and what to expect

Every year in Panama City the police set up traffic blockades along Avenida Balboa, the large, 4-lane road that runs along the waterfront, and set up a tall perimeter fence around the festival area. As with most places these days, there are security lines with pat down (male and female) to ensure no one is carrying weapons.

ⓘ TIP: If you’re not a heavy drinker, get there early. The crowds are thinner and more self-controlled. Besides, the security lines get REALLY long by late afternoon.

We arrived in mid-afternoon, and although the schedule said it should be in full swing, things were just getting started. That’s typical of Panama’s relaxed attitude to life. Still, we could feel an air of anticipation and excitement among the participants who were already there.

And of course, there were culecos, water-filled trucks which shoot streams of water out at the dancing and sweating hordes of people.

Don’t think that avoiding the trucks will keep you nice and dry, though; we saw a number of people carrying loaded water guns. So be prepared to get wet. We did, and we were glad the water was there to cool us off!

Dancing in the streets

One thing about Latinos, they like their music. Where there’s music—and in Latin America that means practically everywhere—there will be dancing.

And the kids liked to get in the act as well.

People dress up for Carnival

Some people who attend Carnival like to dress up in colorful and creative costumes.

Others prefer the costumes of the very traditional diablos. These devil costumes vary by region. While they may have carried—and used—real whips in Bocas del Toro, here at Panama City’s Carnaval, the whips they carry are mostly just used as props.

Here’s our Dutch friend Farieda, posing with a Panama Carnaval diablo. She’s a sport; she helped us plan our one-day Amsterdam itinerary.

And then there’s Panama street food …

Besides the soda, water, local rum and cerveza, there’s a huge variety of really delicious food. You can eat and drink to your heart’s delight. Grilled chicken, chorizo (sausage), hamburgers, hot dogs, plantains, you name it.

ⓘ TIP: Find out where the toilets are as soon as you arrive; you’ll need them!

The full-blown parade begins after sunset, but they don’t wait until then to parade around. So that everyone gets a chance to see the floats, they drive around the grounds while it’s still daylight as well.

The better to photograph you with, my dear!

ⓘ TIP:  On the first night of Carnival, you will be treated to a very nice fireworks display after dark. To avoid the press of people at the end, leave early and find a bar, hotel or restaurant that offers a nice view of the water. You’ll be able to sit and enjoy the fireworks in relative peace and quiet. Check the schedule first, though. You don’t want to miss anything else!

If you want to celebrate a future Carnival in Panama, this website lists the upcoming dates.

Also read our related article: Why You Should Visit Panama for Carnival

Where to stay for Panama City carnival

We recommend staying near Avenida Balboa, the road that runs along Panama’s waterfront. They will be within easy walking distance of all the action. The fiesta is on Cinta Costera, between Mercado de Mariscos and Multicentro mall. (Bear in mind that the closer your hotel is to the activity, the more late-night noise you will hear.)

What else to do in Panama

If you want to see and do more while you’re in Panama, find tours and activities here.

For articles about other parts of the country, check our Panama page .

Linda is multilingual and has been to around 60 countries. Her insatiable love of travel, cuisine, and foreign languages inspired her to create As We Saw It with her husband Dan, a professional photographer. Her goal is to make travel easier by sharing her experience and advice. 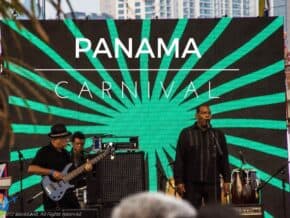 Why You Should Visit Panama for Carnival 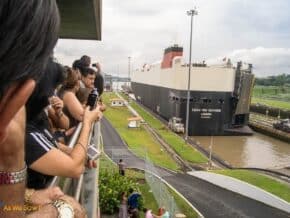 A Local’s Guide to Visiting the Panama Canal

26 thoughts on “Tips on Celebrating Carnival in Panama”

Due to the pandemic, you may need a negative PCR test or vaccination for travel. Further, some sites may be closed or have limited hours. Please check your destinations before making any travel plans.

All content copyright © As We Saw It, all rights reserved. Be nice, don’t steal. For more information about using any images or text, send an email to contact [at] aswesawit.com.
758 shares