If you want a memorable trip to Panama, don’t miss the opportunity to go snorkeling in Bocas del Toro or San Blas. Both of these Caribbean island groups are beautiful above the water, of course, and they are just as pretty beneath the waves.

I recently wrote about spending two days exploring Bocas del Toro, and a reader asked us if we saw any starfish there. The answer is yes, absolutely! There were plentiful brittle stars, as well as orange sea stars, basket stars, and more with names that we know but I won’t bore you with. Here’s a green sponge with some brittle starfish at its base.

Photography is a challenge.

Dan was a little frustrated by not always getting the best focus in his shots. If you plan to take your camera on this trip, be forewarned: It’s harder to focus when in the water than on land because the photographer, the water and the fish are all moving. As if that wasn’t enough of a challenge, this was his first time to try out our brand new underwater point-and-shoot camera. For a first time user, I think he did pretty well.

But then, I’m a lot more forgiving of photography errors. That’s why he’s the photographer and I’m the writer in this team!

The entire collection of Dan’s Bocas underwater photos are in our Bocas del Toro Underwater gallery.

Besides a variety of starfish, we saw plenty of other things, many of which we used to keep in our 90-gallon saltwater fish tank.

Here, we could look at a lot more beautiful marine life than any fish shop could carry, and for a far lower price. I especially enjoyed looking at the flame scallops on the reef. Each one we saw would have cost $6 in the store, yet here they were, free to enjoy (and a lot happier, I’m sure!). How to have a bit of fun while you’re snorkeling

If you look closely at the reefs, you’ll see feathery things sticking out from between the rocks. You might think that they are unusual varieties of coral, but they’re not. They’re actually a type of worm known as a feather duster. Those feathery fronds sweep microscopic particles into their mouths. That’s how they eat.

Feather dusters come in a variety of hues … purple, pink, brown … some are as big as your hand, while others are as small as a fingernail. And those worms are extremely skittish too, which makes them really fun to play with. Any time you get near them, they vanish back into their tubes so quickly that you’ll wonder if they were there to start with! We tried to see how close we could get before they disappeared. It became a fun game. See how small they are? Someday, we hope to go to Hawaii, where there are worms as long as an arm.

Life under the water

This is a type of damsel fish. It kept attacking whenever one of us got close. Damsels are very protective of their young. If you look carefully behind and slightly above the tail you will see the eggs she was protecting.

Though they don’t look like it, these neon-purple sponges are actually animals. Like the feather duster worms, they too are filter feeders. The starfish wrapped around the one on the left is called a brittle star. The area is chock full of brittle stars, and that is not a good thing for the reef.

Draped across some rocks and nestled among the sponges is a mint green carpet anemone. They are outrageously expensive to buy because they are so hard to keep.

I tried to get a better shot of these two butterfly fish while they were feeding, but they kept “fluttering” away from the camera. (Lame joke, I know.)

Where to snorkel in Bocas

Here’s another tip: I don’t recommend that you try to stay in Bocas Town, where the nightlife is, and jump off the nearest dock to go snorkeling. I mean, you can, of course, but you will mostly be watching the fish swim among a lot of bottles, trash, and so forth. It’s better to visit cleaner, more remote areas.

Boat service to other islands is inexpensive and also many tour services are available to take you to better areas. We booked a full-day trip that included dolphin spotting, a lunch stop at a seafood restaurant (bring extra money to pay for the food) and stops on different islands for swimming, snorkeling and exploring.

Read next: Explore the Islands of Bocas del Toro, Panama

Linda is multilingual and has been to around 60 countries. Her insatiable love of travel, cuisine, and foreign languages inspired her to create As We Saw It with her husband Dan, a professional photographer. Her goal is to make travel easier by sharing her experience and advice. 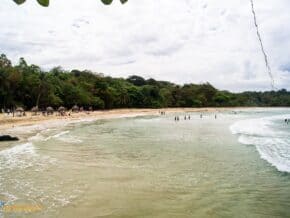 Due to the pandemic, you may need a negative PCR test or vaccination for travel. Further, some sites may be closed or have limited hours. Please check your destinations before making any travel plans.

All content copyright © As We Saw It, all rights reserved. Be nice, don’t steal. For more information about using any images or text, send an email to contact [at] aswesawit.com.
288 shares