Portugal hides in a tiny corner of the huge continent of Europe. It’s the quiet little brother to loud, boisterous countries like England and Germany.

But here’s the rub: those countries and their oft-mentioned capitals are mega-expensive. If you want to get the most bang for your travel buck, you will need to venture further afield. This, my friends, is the best reason to visit smaller, lesser-known places like Portugal, and lesser-traveled cities like Porto.

Table of Contents show
Where is Porto?
Porto is not like Lisbon
Why visit Porto Portugal?
1. The easy transportation.
2. The low prices.
3. The museums and galleries.
4. The Douro River.
5. The delicious port.
6. The fabulous wines.
7. The good eats.
Tips for choosing a restaurant when traveling
8. Lello Bookstore.
9. The wonderful buildings.
10. It’s pedestrian friendly.
Where to stay in Porto

When we heard that a business conference would be held in Portugal, we couldn’t resist attending. The country had intrigued us for ages.

We’d never heard of the city, though. Porto was so unknown to us that we had to search for it on a map. I was shocked to discover that Porto happens to be the country’s second largest city.

Also known as Oporto, Porto is a three-hour train ride up the coast from Lisbon. It lies at the mouth of the mighty Douro River in northern Portugal, ready to ship its namesake port to the rest of the world.

I am embarrassed to admit that I had wondered why anyone would want to visit Porto. I imagined a slew of run-down port warehouses along a dirty river, but I was so wrong.

First of all, those warehouses aren’t in Porto; they lie across the pretty Douro River in the town of Gaia. Secondly, a closer look reveals that they are anything but run down. Visiting port houses is a major tourist attraction in Porto. Enough said.

I had also pictured Porto as a smaller clone of Lisbon, with trams and tiled houses. I was wrong there, too.

Porto has a completely different vibe to Lisbon, too. While Lisbon is a bustling, sprawling capital city, Porto feels more cozy and traditional. Both have been designated UNESCO World Heritage Sites though, with narrow, historical streets, steep slopes and picturesque buildings. So they are similar in that regard.

When Dan and I were finally able to explore Porto, we regretted not having planned a longer stay. A few days in Porto just isn’t enough. This city has enough things to do and see to keep anyone busy for quite a while.

There are a lot of reasons to visit Porto. Here are our top 10.

Porto was named European Cultural Capital in 2001, and it has a thoroughly modern public transportation system.

Skip the subway and bus and take a tram. Much more fun. Or cross the river in a gondola; they have those, too.

3. The museums and galleries.

From a tram museum to world-class contemporary art, Porto has many museums and galleries.

You name it, you can probably find a museum for it. There’s even a museum dedicated to the history of the Portuguese Association Football Cub.

But don’t despair if you’re not a fan of museums. There are plenty of other things you can do in Porto as well.

A cruise up the river is not to be missed, and based on our experience you’ll see Porto in a new way.

We were fortunate to be invited on a cruise to an event upriver. The party was held at a beautiful historic pousada on the river, and we were able to stay long enough to watch night descend over Porto.

Watching Porto’s lights twinkle on is a magical experience.

Seriously, how can you go to Porto and not try the port? Porto is so famous for its fortified wine that it even gave Port its name!

Sure, you could order a glass at dinnertime, but here’s an even better idea: Visit a port wine cellar for a tasting. Many are free, so why not make a day of it?

Or maybe plan for two days. After we got home, we found a cheap 2-day combo ticket that sounds amazing. In addition to a port wine cellar tour, you also get access to two different hop-on, hop-off sightseeing bus tours and a Douro river cruise.

Not a bad way to spend a weekend, if you ask me.

If you’re a wine aficionado, you may already know that Portugal produces some excellent wines. You may also know that Porto is the gateway to the Douro Valley, which is one of Europe’s largest demarcated wine areas.

The Douro River valley has a unique shale soil, and wines produced here have a dry, minerally character. Porto is the perfect place to base yourself if you’d like to sample the region’s wines.

We can particularly recommend Vinho Verde, which is a Portuguese wine region as well as a wine. While it literally means “green wine,” it’s more accurate to call it “young wine,” because it’s not aged for very long before being bottled. Vinho Verde wines have a crisp vintage that is low in alcohol and has a slight fizz. Perfect for summer refreshment!

Even nondrinkers will find Porto a foodie paradise, with restaurants and bakeries at every turn. There’s so much variety that you’ll be spoiled for choice. You might even decide to book a food tour so you don’t miss out on the best Porto has to offer.

There’s also a lot to be said for serendipity. You could do what we did and wander the side streets until your nose pulls you into a small, local restaurant to try something new and unfamiliar.

Just be prepared, because temptation is everywhere. Right after stuffing ourselves in a local lunch spot, we immediately succumbed to an artisanal pastry shop. The aroma of the baked goods in the window was just too enticing to pass up.

Tips for choosing a restaurant when traveling

We rarely mention “where to eat” on As We Saw It. Tastes and budgets differ, places come and go, cooks change. But that doesn’t mean you can’t find a delicious meal while traveling.

Here are the things we look for:

If you’re a J.K. Rowling fan, this is the bookstore for you, because they say it was an inspiration for her Harry Potter books. If you’re not, you’ll still find it one of the prettiest, quaintest book shops you’ll ever see.

But if you go in just to look, be warned. They don’t appreciate the gawkers and insist you don’t take any photos. Better to buy a coffee or a book (they have both) and pity them as they endlessly repeat “no pictures, please.”

Who wouldn’t be charmed by tiled homes and buildings? Heck, even Porto’s railway station and churches are tiled!

And there’s a new shopping mall being built near that bookstore, with plenty of cafés and more than enough shops to poke around in …

Porto is so walkable that you won’t realize how far you’ve gone until you decide to head home. Its sidewalks are wide, traffic is easy, and there are plenty of parks and shopping areas just begging for a stroll.

And then there are all those narrow, tiled pedestrian walkways that practically call you to come and explore….

Our time in Porto was too short; there is so much more to see. Not to mention it’s a wonderful jumping-off point for touring northern Portugal’s unique wine region, which, by the way, is a UNESCO World Heritage Site.

Special thanks to Visit Portugal for wisely beginning our conference with a tour of Porto. It certainly helped us see the city in a different light.

Dan got some beautiful photos of Porto as well as shots from other locations in the Douro valley. Had it not been for a conference, we may never have discovered the beauty of northern Portugal.

I suspect that we have only begun to discover all the reasons to visit Porto and the Douro Valley.

Where to stay in Porto

We stayed at the Sheraton Porto Hotel & Spa, which was close to where our conference was being held.

Splurge: Pousadas offer the most uniquely Portuguese experience. Each hotel is a one-of-a-kind, restored historical building and absolutely top-notch. Pestana Palácio do Freixo is a beautiful pousada & national monument in Porto‎.

ALSO READ:
6 Best Things to Do With One Day in Guimaraes, Portugal 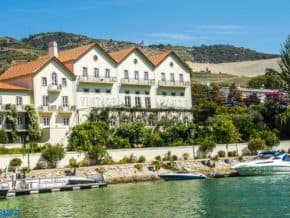 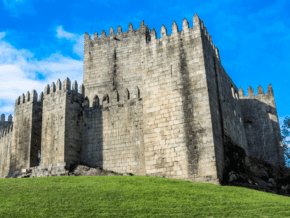 6 Best Things to Do With One Day in Guimaraes, Portugal 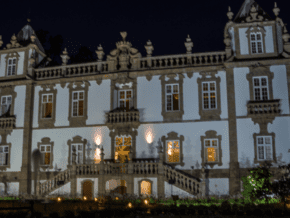 Should You Stay at a Portuguese Pousada?