Colmar is one of the most beautiful towns we have ever seen. Its cobblestone streets and walkways, flower-lined canals, sidewalk cafes, and ancient half-timbered houses make it a photographer’s dream.

Think Disney’s Beauty and the Beast meets real life. Colmar is such a pretty village that it could be Belle’s home town.

France’s Alsace region was never on our radar until we saw our Rhine cruise itinerary. We hesitated to sign up because it was an optional excursion (read: additional cost), but we went for it anyway. As we saw it, it might be our only opportunity to visit.

Read more: What Is on a Rhine River Cruise Itinerary?

Colmar is not on the Rhine river, so our tour began with a bus ride through Alsace. It was nothing like Strasbourg, the region’s capital city. Alsace is full of centuries-old villages and half-timbered homes, but none were as pretty as Colmar.

Once in town, enjoyable walk through Colmar’s medieval streets. Our tour guide brought us by all of the important sights and explained about the history of the city. The culture in this region has been shaped by wars between France and Germany. Alsace is a coveted piece of real estate so Colmar has alternated between calling itself French or German for centuries.

The logical result is that it has morphed into unique blend of the two cultures. They may be a part of France on the map but the architecture looks German. Their language on the other hand? It’s neither. The locals now speak their own distinct dialect, Alsatian.

Tangent: Come to think of it, there are Alsatian dogs, too. But we didn’t see any while we were there.

Back in the day when almost everyone was illiterate, shopkeepers created a different way to indicate what they sold. They made little wrought-iron brackets to hang up over the door. I like how this modern-day barkeeper is keeping with the theme.

I have to confess that a lot of it was interesting I have forgotten most of what she told us. I was quite distracted by the ancient half-timbered houses. 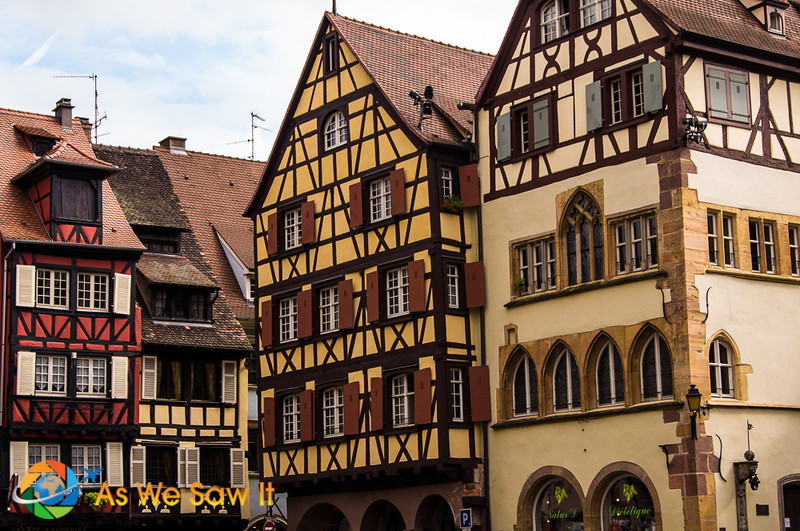 As if that wasn’t enough to enchant me, the occasional clop of horse-drawn carriages really added to the town’s charm. 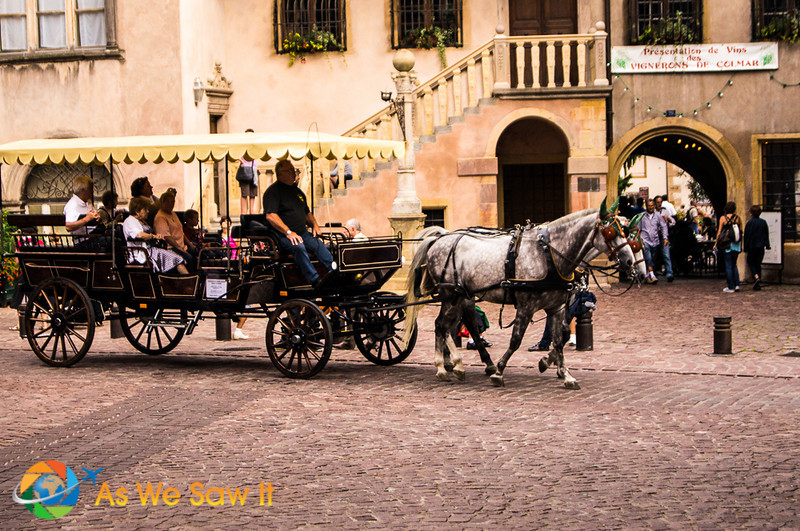 What to see in Colmar

After our tour, we set off to explore the town. Take a look at Wikipedia’s list of Colmar’s main sights and you’ll see that this is a city that needs a lot of time to enjoy. Don’t stop by for a day, or even just one night. If you do, you’ll leave thirsty for more, as we did.

This was the birthplace of Bartholdi, who designed the Statue of Liberty, and his home is open to tourists. If we had had more time I would have loved to visit but there was so much to see that we couldn’t bring ourselves to spend so much of our time in one place.

Another major attraction is a 13th century Dominican religious sisters’ convent. It is the home of the Unterlinden Museum and the 500-year-old Isenheim altarpiece. 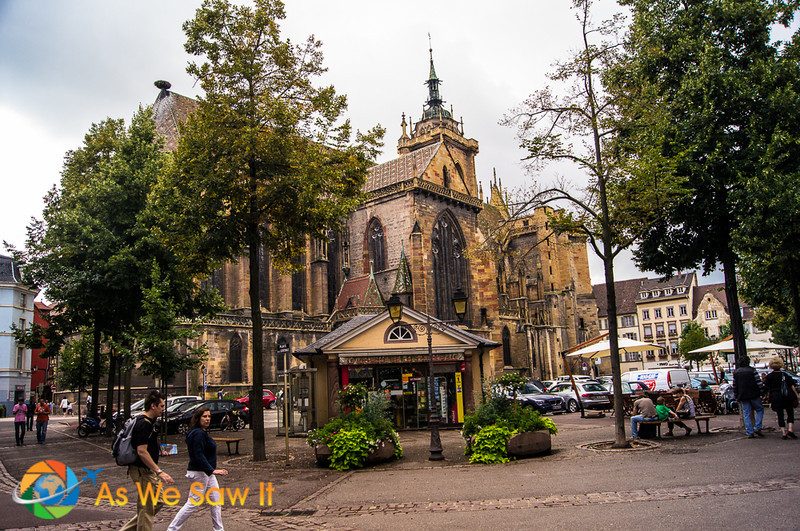 After the tour we spent our time wandering through back streets and visiting various food establishments. In other words: practically drooling in a chocolate shop and discovering aromatic cheeses that we’d never known existed.

We also made it a point to pop into a wine shop to see what they had on offer because Colmar is situated along the Alsatian Wine Route and calls itself the “Capital of Alsatian Wine.”

Have you ever been to a place as pretty as this?

[su_box title=”Inspired?” box_color=”#8cc640″ title_color=”#333333″]Colmar was just one of our Rhine River cruise ports. I have a whole collection of stories about our trip that you’ll also enjoy.

Click here for a link to our stories about other nearby destinations.[/su_box]

Linda is multilingual and has been to around 60 countries. Her insatiable love of travel, cuisine, and foreign languages inspired her to create As We Saw It with her husband Dan, a professional photographer. Her goal is to make travel easier for others and to offer a brief escape to another land.
We often link to affiliate products and services that we believe will benefit our readers. As Amazon Associates, we earn from qualifying purchases. Learn more here,

20 thoughts on “Colmar: The Prettiest Town in Alsace”