One Day in Willemstad, Curacao

Last Updated: March 4, 2022February 1, 2011
Table of Contents show
Places to stay overnight
Learning about Curaçao from a native
How Willemstad became so colorful
Walking through Willemstad
What language do they speak in Curaçao?
Willemstad bridges
Medicine the Caribbean way
Relaxing on the Willemstad waterfront
Willemstad food
Where to stay in Curacao
Read more
Online
On Amazon

Willemstad is the colorful capital of Curaçao, a southern Caribbean island just off the coast of South America. It’s a short flight from Panama, so when it came time for us to renew our tourist visas, we decided to spend a weekend there. We’d spend one day in Willemstad for a little sightseeing, and the rest of our time at the resort. Perfect.

We arrived in Curacao’s small, open-air airport with a single carry-on suitcase and a dive bag of snorkeling gear between us. I confess to feeling rather pleased as I watched other people struggle with big suitcases.

No problems for us! Aside from a bit of sightseeing in Willemstad, spending much of your holiday in the water means you shouldn’t have need of much else to wear. At least, that’s my philosophy.

Once again, I digress.

Learning about Curaçao from a native

As we rode to our hotel we chatted with our taxi driver. If you want to get accurate impressions of a country, talk to a local.

We learned that the island gets its fresh water from a desalinization plant. When I asked about the distant oil refinery I saw, he told me that much of the country’s income and employment comes from the oil industry because it’s so close to Venezuela and has a deep-water harbor. (And in case you were wondering, he pronounced it Koo-ra-sow, not CURE-a-sow or ca-RA-ko.)

Dushi. That’s the local word we soon began to use, and it’s an all-inclusive word for everything good. In Curaçao it’s the all-purpose word that describes tasty foods, something beautiful, or good things in life. Dushi even means “sweetheart”, “babe” or even “sexy”.

While waiting for our turn to check in, we enjoyed a leisurely lunch in the very dushi open-air restaurant. As soon as we got the key, we dropped our bags in the room and grabbed our cameras. Willemstad boasts traditional Dutch facades on its historical buildings and we were eager to explore the town.

How Willemstad became so colorful

The story begins in 1817, when Governor-general Albert Kikkert complained about the glare from Willemstad’s buildings. It was giving him headaches, so he decreed that they should be repainted … any color other than white. What resulted was a multitude of beautiful pastel colors that still adorn the capital city’s buildings and beg to be photographed by tourists like ourselves. **

Rather than take a tour on our first day in Willemstad we opted to take it easy and just walk around and photograph whatever caught our fancy.

Willemstad lies on both sides of the water and there are plenty of pedestrian-friendly streets to meander down. We came across an open-air market and enjoyed looking at all the fresh foods and souvenirs. It’s always interesting to see what ingredients are popular in the local cuisine.

What language do they speak in Curaçao?

After I translated a French souvenir to Dan the proprietress began speaking to me in French. During our brief conversation I learned that, although the island’s official language is Dutch, most natives speak four fluently: Dutch, English, Spanish and Papiamento, the local dialect. That’s really impressive. Most Americans can only speak English (and the Brits would even disagree with that!).

Two bridges span the water, the beautiful Queen Juliana bridge, one of the highest bridges in the world, and the Queen Emma pontoon bridge.

It is fascinating to watch the pontoon bridge, a wooden pedestrian bridge supported by 16 floating pontoons. When a ship needs to pass, two motors swing the bridge open from one side.

If the bell rings when pedestrians are on the bridge, they have to run to make it across before it opens. Woe to those who don’t move quickly enough; they’ll have to ride it out and wait until it closes to finish their journey.

To avoid ruining my holiday, I finally surrendered and decided to buy some decongestant. Dan stopped at an ATM for Antilles guilders (we try to avoid money changers as theexchange rate is worse).

While he remained outside with his camera, I entered a corner pharmacy. The pharmacist asked how many pills I wanted. As in Panama and Indonesia, medications are sold by the tablet, not by the box. How resourceful, economical, and different from America.

Relaxing on the Willemstad waterfront

Back outside, we walked back to the waterfront and walked to an open-air cafe where a live band was playing. We sipped a drink and watched the people and boats pass by as the workday drew to a close.

Finally it was dinnertime and we went in search of a restaurant. Curacao is an island of immigrants and so its cuisine is a mélange of foods. It’s easy to find Dutch bitterballen and rijstaffel, Latino empanas and Antillean krioyo. Indonesian dishes such as nasi goreng and satay are also popular but (been there, done that) I’d had enough of those when we were on Bali. We prefer to try local dishes, anyway.

Returning to the other side of the river for dinner, we chose a restaurant with a view of the water. Any island is bound to have fresh seafood so Dan ordered a spicy krioyo sea bass. Not a fan of hot peppers, I chose a local dish, called keshi yena. Keshi yena is a ‘stuffed cheese’ that but is traditionally made with chicken, olives, vegetables, seasonings and raisins. I couldn’t taste the cheese; unfortunately their version was so salty that I couldn’t eat it. (The waiter offered me a dessert on the house. I guess the chef tried it and agreed with me.)

**The Rest of the Story: After Governor-general Kikkert’s tour of duty ended, the citizens discovered that he’d had a financial interest in the paint company.

Where to stay in Curacao

We stayed at the Hilton Curacao and were super pleased with the amenities.

Travel styles and budgets differ. Whether you prefer a hotel, hostel, or vacation rental, Booking will help you find the best accommodation for your visit.

The Calculated Traveller offers an itinerary for Curacao in one day. That’s ideal for cruise ship passengers.

Plan your trip with these books: 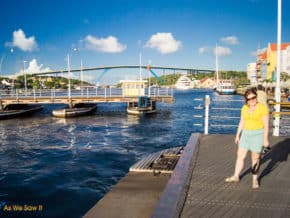 Is Curacao Worth Visiting? 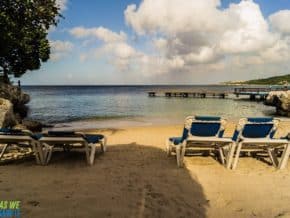 Forced to Relax in Curacao

3 thoughts on “One Day in Willemstad, Curacao”