8 Best Things to Do in Corfu (Kerkyra)

A few years ago, we took a cruise that stopped for a day in Corfu — or Kerkyra, as the Greeks like to call it. One of the Ionian Islands, Corfu has long been one of the hottest vacation spots in Greece.

With a charming ancient city that’s a UNESCO World Heritage Site, endless sandy beaches for sunning, and a picturesque backdrop of mountains and sparkling, cerulean waters to tempt the camera, it’s no wonder that visitors consider it one of the best Greek islands to visit. Castles and monasteries are everywhere, there are plenty of things to do in Corfu, and every panoramic drive is full of awe-inspiring views.

Couple all of that with a warm, sunny climate, fresh seafood, and endless flavorful olive oil and local wines. What’s not to love?

A brief history of Corfu

Corfu’s strategic location has made it a coveted piece of real estate. It’s been under the rule of many empires. The end result is that the culture of Kerkyra is a unique blend.

And that’s where Corfu is today.

Best things to do in Corfu

If guided shore excursions are on your agenda, try to return early enough to explore the quaint, ancient city known as Corfu Old Town. We suggest reserving three hours or so for these Kerkyra attractions:

Our original plan had included a visit to Achilleion, an ornate palace outside of Corfu. The summer palace was built in the 1890s for both Empress Elisabeth of Bavaria and Germany’s Kaiser Wilhelm. It’s filled with Greek statuary and has a breathtaking panoramic view of Corfu and the whole southern part of the island.

And then we saw how many buses were waiting for cruise passengers and decided to skip it. Bus tours aren’t for us. We can’t get good photos when there are crowds, and besides, there’s always that one person who slows everyone down.

I kicked myself later, when I realized that we could have booked a private tour and avoided the hassles. Some guided tours take you to both Achilleion AND Old Town Corfu, and as a bonus, they also stop at other places along the way. It would have cost less, too.

Between the 1300’s and 1700s, Venice built three forts to protect the island. We visited Corfu’s ancient Palacio Frourio (old citadel), which dominates the waterfront.

The Citadel is separated from the island by a narrow moat, but that doesn’t deter anyone from visiting. We joined everyone in crossing the moat to visit the ancient Venetian fortress.

Modern-day warfare being what it is, the old Citadel is more useful for cultural events and concerts these days.

Almost 40 churches are spread around Corfu, and most of them are Orthodox or Roman Catholic. The Church of St. George is an exception, built to serve the religious needs of the Anglican soldiers who served in Corfu during the British occupation.

The Church of St. George is considered one of the largest churches in Corfu. It’s only open once a year … for Easter.

Even though it resembles an ancient Greek temple, it dates from 1840. You’ll find it on the southern flanks of the Palaio Frourio.

The treat got better when we turned to see another of Corfu’s fortresses behind us, Neo Frourio (New Citadel). We bought tickets and went inside.

If nothing else, it’s worth the price of admission for the views alone.

Corfu’s main church is dedicated to its patron Saint Spyridon, a bishop who played an essential role in the First Council of Nicaea (325 A.D.). The saint’s actual body still lies in a sarcophagus inside the church, to the right of the altar. It’s quite an attraction for the faithful.

The bell tower at Saint Spyridon is the highest spot in Corfu. You can see it in the above shot.

Dan was severely chastised when he began to photograph inside the church. This really surprised us, because plenty of photos already exist on the Internet.

We meant no disrespect. Quite the opposite, in fact, because this religious site is important to Corfu and we wanted to share it with our readers.

He was able to get the shots he wanted, though. The caretaker and I became engrossed in a conversation about the church and its patron saint. Apparently Saint Spyridon (b. ~270 AD) is honored in both Eastern and Western Orthodox traditions, and I enjoyed hearing about the miracles that have been credited to him. I could tell that the man was truly proud of his church.

Many people don’t realize that Jews have lived in Corfu for centuries. At one time, the town had four synagogues, but only Scuola Greca survived the Allied bombings during World War II. Painted yellow on the outside, the Venetian style synagogue was built in the 1800s.

Nearly 50,000 Jews lived in Corfu back then, but these days the population has dwindled down to 60.

Travel is all about immersing yourself in a new environment, and that includes its buildings.

Most of the houses in Corfu Old Town date from the 19th century, but you’ll still find the odd arch here and there that is so typical of Venice. Venetian or not, gawking at all the structures is fun.

We enjoyed aimlessly meandering through Corfu’s ancient bougainvillea-laden cobblestone streets. It was fun, peering into intriguing shops and following staircases and alleyways just so we could see where they would lead us.

All that meandering rewarded us with a treat: It brought us to a hill above Corfu and its bay.

Corfu town is a “living” medieval city. It’s blessed with a delightful maze of winding streets and alleys lined with excellent shops and restaurants.

Any fashionista will revel in the jewelry stores and boutiques selling locally-made dresses and lacy jackets, while others will enjoy the ouzo shops and craft stores featuring pretty embroidered cloths, local soaps and more.

Sometimes things happen that are beyond your control and you have to adjust your plans. When you travel, it usually seems to work out well in the end. Today we discovered Ohi Day.

As we walked through the streets, Greece’s blue-and-white flags were everywhere. And I mean everywhere. We found ourselves scratching our heads in bewilderment … I mean, this was far above your everyday patriotic display here.

What is Ohi Day about?

We were surprised to discover that today was a national holiday: Ohi Day, the “Anniversary of the No!“

October 28 marks the anniversary of the date in 1940 when Greek Prime Minister Ioannis Metaxas rejected an ultimatum he had received Italian dictator Benito Mussolini. In the wee hours of the morning, Mussolini sent a message demanding that Greece allow Axis forces to enter Greek territory and occupy certain unspecified “strategic locations” or otherwise face war. Metaxas refused with the reply, “Alors, c’est la guerre” (Then it is war).

Within an hour Axis troops were at the border and Greece was pulled into World War II. The Greek population took to the streets, shouting “όχι” (No!) and from then on, October 28 has been Ohi Day.

Everywhere we went, students and adults were gathering, preparing for to parade through the Old Town’s streets.

Later in the day, we heard music. The parade was starting! We broke off our sightseeing (okay, wandering) and hurried to watch them pass by. It was worth it. What a colorful experience!

Tip: To experience Ohi Day yourself, plan your trip so you can be in Greece on October 28. It’s an annual holiday throughout Greece and Cyprus.

Plan your trip to Corfu Greece

What to eat in Greece

Eating a foreign cuisine on its home turf is one of the things we most look forward to when we travel. We try to make it a point to try not only as many regional dishes as possible, but to see what is on offer at the markets.

Corfu was our first opportunity to eat Greek food in Greece, although it was hard to settle on a place. They all looked good. The weather was too hot for a heavy cooked lunchtime meal, so we decided to order something light, along with a glass of Mythos, the local brew.

The Greek salad they offered (horiatiki salata) sounded ideal. Except … the Greek salad we got was not what we expected. It came simply dressed with a drizzle of olive oil—no lemon or vinegar—over a big, fat, massive block of feta cheese.

The differences became even more pronounced once we had pushed the cheese aside and realized that there was not a single lettuce leaf in sight.

(And for those of you who have been to Florida’s Greek community in Tarpon Springs, there was no potato salad, either.)

Call us converts. We liked it so much that we ordered the same lunch every day, even when we visited Athens. Actually, these salads were so delicious and so unlike the Greek salads we have had elsewhere, I had to share the recipe as a blog post, My Big, Fat Greek Salad Recipe.

I hope you take the time to make it. I think you’ll prefer it, too. We recommend you enjoy your big fat Greek salad along with a glass of Mythos, the Greek beer. Or a glass of ouzo, if anise liqueur is more to your taste. 😊

Is it worth visiting Corfu for a day?

Corfu is a beautiful and interesting island with plenty to offer tourists. With so many things to do in one day, it’s the perfect destination for those who want to make the most out of their vacation. Whether you’re interested in history, nature, or just relaxing on the beach, you’re bound to find plenty of things to enjoy. 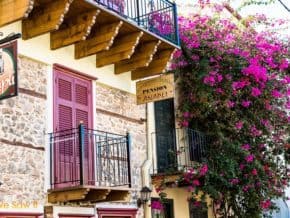 One Day in Nafplio, Greece 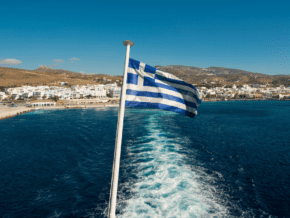 7 thoughts on “8 Best Things to Do in Corfu (Kerkyra)”