One Day In Bangkok: What to See 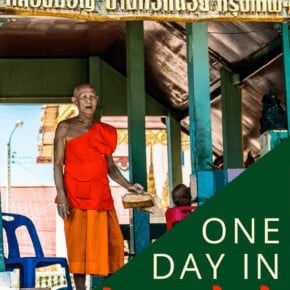 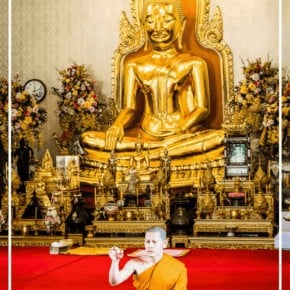 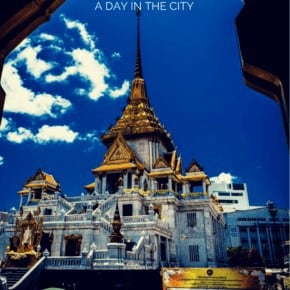 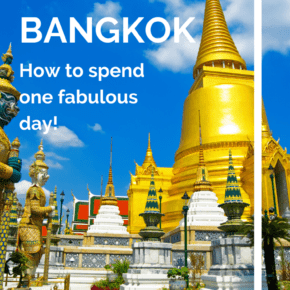 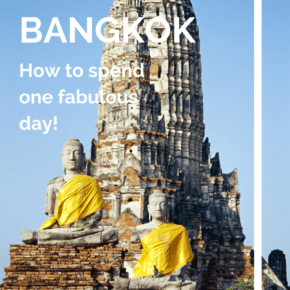 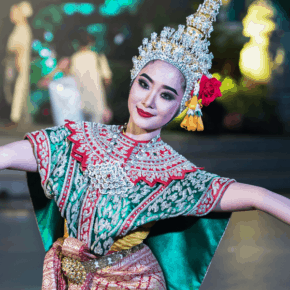 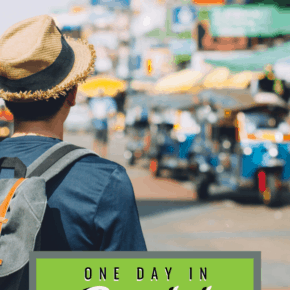 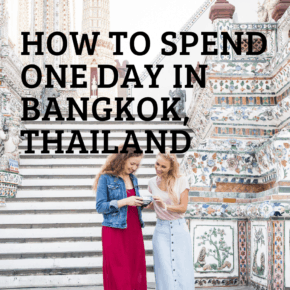 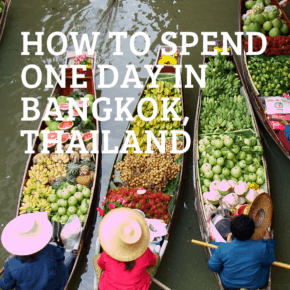 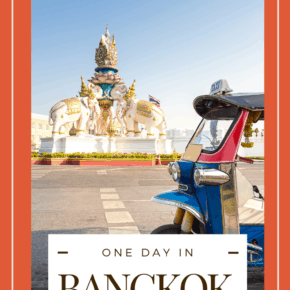 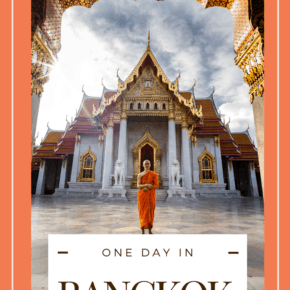 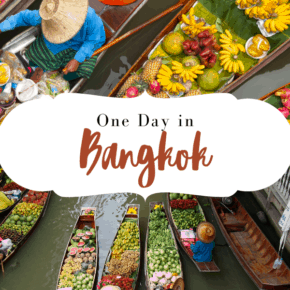 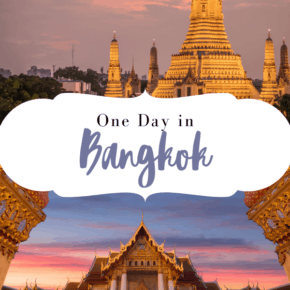 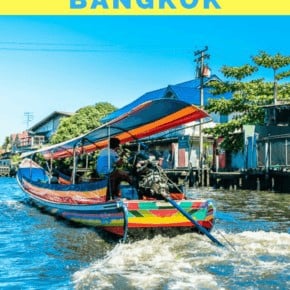 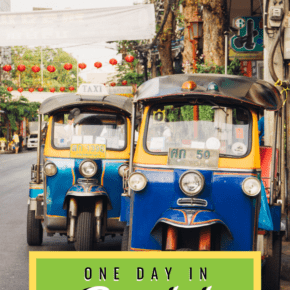 Bangkok, the capital of Thailand, is an intriguing city, famous for its opulence, ornate shrines and exciting street life. It is one of Asia’s most cosmopolitan cities too, with grand palaces and temples, busy markets and a vibrant urban nightlife.

Boasting high-rise buildings, ultra-modern shopping malls, ancient sights, colorful markets and exotic restaurants, touristy Bangkok is worth a visit at least once in a lifetime.

How To Spend One Day In Bangkok, Thailand

A few years ago, an unavoidable airport delay forced us to miss our flight connection at BKK airport. With nearly 24 hours in Bangkok to fill, we decided to make the best of it. We asked our hotel concierge to arrange a tour so we could see the city’s most important highlights.

This is where our tour guide took us. Grab a great tour book to aid your adventure. Here’s the one we used: 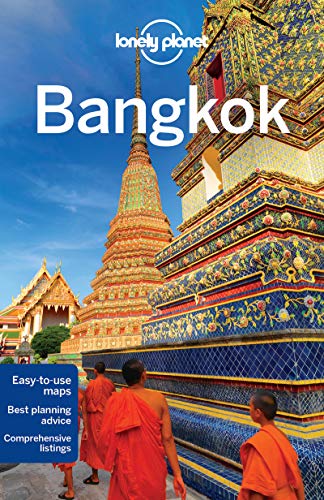 Where to stay in Bangkok

Bangkok is relatively cheap for a capital city, so if you’ve always wanted to stay in a classy boutique hotel, now’s your chance. You might even splurge on fine dining and private tours around the city.

If you happen to be on a budget, you can lodge in an affordable mid-range hotel or guesthouse.

Either way, if you want to immerse yourself in local culture, do what the locals do. They dine on street food, eat at hole-in-the-wall restaurants, and get around the city with tuk tuks, public transport or taxis.

ⓘ TIP: The Chao Phraya River is one of the best areas to stay in Bangkok. Backpackers prefer Khao San Road.

Best places to visit in Bangkok in 1 day

A few iconic sights belong on every Bangkok one day itinerary. Seriously, your trip to this beautiful part of the world would not be complete without visiting these spots.

Many of these sights are near each other, which is convenient. And though it’s important to keep cool, you’ll need to dress modestly when visiting the temples, so keep your shoulders and knees covered.

ⓘ TIP: Booking a tour will give you an local guide who can explain Thai customs and beliefs. We found it convenient as well, because our guide pointed out the “don’t miss” highlights and translated from Thai as needed. Learn more here.

Built in 1782, this awe-inspiring complex has been the residence of the Thai King and the Royal court for the past 150 years. It acts as the administrative seat of government, housing the Thai state departments, the war ministry, and the mint. It’s also occasionally used to host important ceremonies, like the late King’s recent funeral, as well as to accommodate visiting heads of state.

This colorful and intricately-built structure is a testament to the craftsmanship and creativity of the Thai people. It has continued to draw the attention and respect of visitors from around the world.

ⓘ TIP: This awe-inspiring historic complex is massive. Try to go with a tour guide so you don’t miss out on important details.

Out of respect for its importance, no photos of the Emerald Buddha are allowed.

According to legend, an Indian sage prophesied that the Emerald Buddha would bring “prosperity and pre-eminence to each country in which it resides.” Thus, it is highly revered and considered as the protector of the country.

Wat Pho (the Temple of the Reclining Buddha) is the oldest and largest temple complex in Bangkok The temple complex is huge, taking up an area of almost 20 acres. Most of the complex is a training center for traditional medicine and massage therapy.

However, most people visit Wat Pho for the giant reclining Buddha. The statue is impressive–46 meters long and 50 meters high and covered in gold leaf.

The Reclining Buddha is located right behind the Temple of the Emerald Buddha. And yes, you can get a Thai massage while you’re there.

Wat Traimit, also known as the Temple of the Golden Buddha, is home to the largest seated gold Buddha in the world. The exquisite golden statue measures 3.5 meters and weighs 5.5 tons. It was discovered sometime in the 1950s, when East Asiatic Company bought some land near the temple.

One of the terms of sale was removal of a plaster Buddha statue on the site. Due to its weight, the crane dropped the statue. After an overnight rain, some monks passing by the fallen statue noticed dazzling gold shining through the plaster. It was later peeled off to reveal the regal figure in all its glory.

The origin of the statue is still unknown, but it is believed to have been carved during the Sukhothai era, when artisans disguised golden Buddhas from invading armies by wrapping them in plaster and stucco.

ⓘ TIP: Wat Traimit is located at the end of Chinatown, near Hualampong Railway Station. It makes a great starting or ending point for a Chinatown tour.

Take the Chao Phraya Express Boat across the river to Wat Arun, better known as the Temple of Dawn. Its design is very different from the other temples in Thailand, and it’s easily one of the most stunning temples in Bangkok.

The temple is named for the Hindu god Aruna, often personified as the radiations of the rising sun. Fitting, because the temple is made of colorful glazed porcelain tiles that glimmer in the sunlight.

It’s not really a sight, but riding a tuk-tuk is a Bangkok must do. These three-wheeled vehicles are a super-affordable way to travel short distances around the city. Think rickshaw with a two-stroke engine … that puttering noise is why it’s called a tuk-tuk!

Bangkok has congested streets and tuk-tuk drivers know all the little back roads to beat the traffic. On the tuk-tuk, you get the full experience of all the sights, sounds and smells of the city. So even if you are only in Bangkok for a day, you must experience a tuk-tuk. We take it whenever we can.

To see as much as possible, go with a guided tour. Not only does it maximize your available time, you’ll have a local guide to answer your questions and point out the most important sights.

Bangkok’s Chinatown is a mix of Chinese and Thai cultures, making it a wonderful part of town to lose yourself in. Your camera will be busy capturing the colorful temples and everyday street scenes, and your mouth will be happy sampling the assortment of flavorful street food on offer for a pittance.

Chinatown is super lively at night; the streets are packed with people and vendors selling trinkets and delicious street food. This is the perfect place to stop and order a few dishes at a restaurant, or just pop around to try whatever strikes your fancy from a street stall.

We think trying traditional foods enhances the travel experience. It’s fun to eat in local restaurants and experience new flavors, and even more so when someone shows you around.

However, nothing can ruin a trip faster than a case of Bangkok Belly. It’s better to go with a guide, so you can rest assured the food will be safe to eat.

Our guide took us to the best food Bangkok has to offer, and will customized our experience. So if you’re a picky eater or have sensitivities, no worries.

ⓘ TIP: Chinatown is a popular foodie haven, and there are food tours all over the city. They’ll take you by bike, on foot, or via bicycle. Here’s the food tour we enjoyed; we went by tuk-tuk.

Things to see in Bangkok in 2 days or more

Would you like to go shopping on water? If yes, Damnoen Saduak, famously known as the floating market, is where you should be. Located in Ratchaburi, on the outskirts of Bangkok, the market has also been dubbed the ‘Venice of the East.’

You can buy fresh fruits and delicious Thai foods while cruising on a boat, and get to chat with the locals too. For a more touristy experience, go for the ‘Floating Market Cruise Day Trip’. This six-hour treat includes pick up from your hotel, transportation in an air-conditioned bus and an extensive tour, all for a low fee. Some tours also include a visit to a coconut farm, where you can see how sugar is produced for desserts and sweets.

ⓘ TIP: Go beyond the usual sights with this list of 7 unique things to do in Bangkok.

Bangkok Flower Market is the largest wholesale flower market in all of Thailand. It sells flowers, fruits, and vegetables 24 hours a day, 7 days a week.

This is where the faithful come to buy their offerings. The market has tons of energy in the evening, while it’s and a more relaxing stroll in the daytime.

Lumpini Park is a green haven for visitors, away from the busyness and traffic in the city of Bangkok. It’s an ideal place to spend a quiet afternoon under the shade of a Chinese pagoda, or hang out on one of its many lawns. You could also enjoy a boat ride on the nearby lake.

Occupying 58 hectares of land, Lumpini Park was formerly called Sala Daeg field, named after Buddha’s birthplace in Nepal. It was donated by Rama IV in 1925. The park has been used for some anti-government protests that eventually became violent, so do a quick check on the current status before visiting.

In 1874, King Rama V converted the palace of Rama I to a museum so Thailand’s contemporary and ancient artifacts could have a home. The collection includes ceremonial and religious artifacts, regalia, games, weaponry, ceramics, musical instruments and so much more.

Until the 1970s, the National Museum was Thailand’s only museum, which explains its huge collection of exhibits. It is now one of the largest museums in Southeast Asia, with three permanent exhibitions which are spread across several buildings.

Guided tours are offered in English, and most exhibits and multimedia displays are in both Thai and English.

To be honest, one day is not enough for you to experience the supreme beauty of Bangkok. However, if that’s all you have, you’ll definitely get a blast from visiting all the interesting places described above.

Here are some resources to help you plan your own Bangkok trip:

Travel planning tools we use

When is the best time to visit Bangkok?

The best time to visit Bangkok is either in late December or early January, which is their winter season and considered the peak period for tourists. This is because the city can be too hot at other times of the year. The temperature is also relatively low in November and February.

Read more about Bangkok and Thailand

Here are some articles and books to help you plan your Thailand holiday.

Here are some related books for further planning. 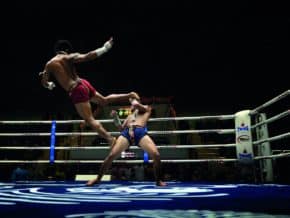 7 Unique Things to Do in Bangkok 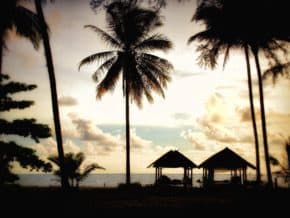 10 Best Islands in Thailand for a Perfect Beach Holiday 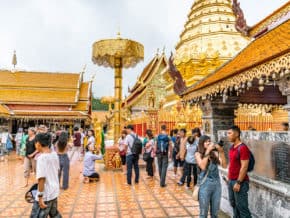 Guide to the Best Things to Do in Chiang Mai