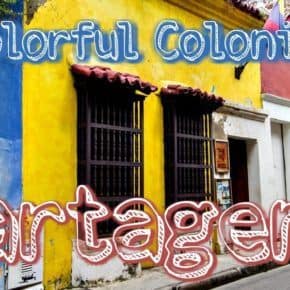 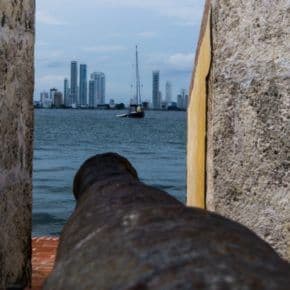 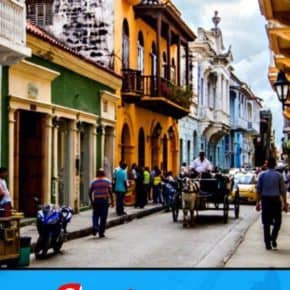 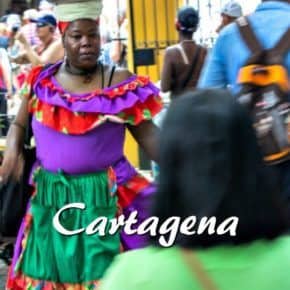 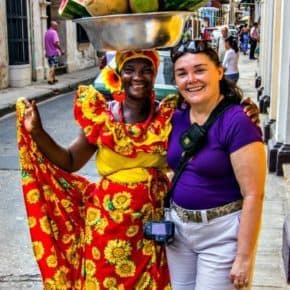 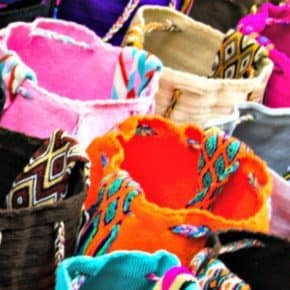 Beautiful, mysterious, and unique, Old Town Cartagena has no trouble getting attention. Its narrow streets and gorgeous architecture have made it one of Latin America’s most coveted and popular destinations.

I first learned of Cartagena way back in 1984, when I saw the action-adventure movie Romancing the Stone. In the film, Kathleen Turner arrived in Colombia to save her kidnapped sister and drafted Michael Douglas to help her get to Cartagena.

Years later, I found out that she had mispronounced the city’s name throughout the adventure. I also learned that Cartagena Colombia is quite a popular tourist destination … and that no, you don’t need to worry about being kidnapped there!

What the movie didn’t tell me was how special Cartagena really is. We didn’t have a clue … until our weekend escape to the city for a visa run.

Table of Contents show
Is it safe to visit Cartagena?
Places to stay
What makes Old Town Cartagena so enchanting?
Cartagena’s colorful street life, as we saw it.
Cartagena architecture
Is Cartagena a walled city? Yes.
Protecting Cartagena
Why is Cartagena famous?
More about the architecture in Cartagena
Want to read this later? Save it to Pinterest!

Is it safe to visit Cartagena?

Romancing the Stone notwithstanding, you may still be wondering if you need to worry about safety while you’re visiting Cartagena.

The short answer is, no. Colombia made the news years ago, but crime rates have dropped hugely in recent years. Now, Cartagena ranks as one of the safest cities in Colombia.

That said, it is a city, so don’t be stupid. You still need to take normal precautions while you’re in this magical destination.

We think that Cartagena, on Colombia’s Caribbean coastline, is one of the best reasons to visit South America. Even more so if you have a camera. It has inviting beaches, fantastic restaurants, lively street life, and an old town so full of charming colonial architecture that it deserves its UNESCO World Heritage status.

Officially known as Cartagena de Indias, Cartagena was named after a town in Spain. Many things work together to make this city a perfect destination. You can look forward to delicious seafood, a rich history, lively Afro-Colombian culture, incredibly friendly locals, and a nightlife that will keep you dancing ’til dawn.

Cartagena’s colorful street life, as we saw it.

Sometimes the best way to show what a city is like is to share some photos. So here are a few more shots of Cartagena street life.

And yet, the astonishing architecture also brings Cartagena together and endears it to its visitors. The buildings in Cartagena range from a stone hilltop fortress to an inquisition-era palace and remarkable colonial architecture.

Couple that with a good infrastructure, world-class restaurants, and modern high-rises, and it’s no wonder Cartagena is such a popular tourist destination. Tall, massive buildings now decorate the shoreline with the after-dark glow of hundreds of windows.

Day or night, the gorgeous riot of color permeating the streets of the city adds an air of elegance and exuberance that makes it irresistible.

Wherever you go in this historic Old Town, its brilliant hues dominate the streets and contrast beautifully against the azure sky that covers the sunny city throughout the year.

Is Cartagena a walled city? Yes.

As breathtaking as the Old Town’s vibrant architecture is on its own, it becomes even more impressive when you take into account the history that shaped it. Throughout the city the iconic weathered stone walls, old forts, centuries-old churches and ancient cannons poised ready for battle, promise a fascinating story.

Cartagena’s strategic location at the top of South America made it one of colonial Spain’s three most important ports. (Havana and San Juan were the others.)

With the largest bay in the Caribbean, the city became an indispensable center of commerce. Along with Portobelo on Panama’s Camino Real, Cartagena played a special role. It was Spain’s gateway to the precious Inca treasures that were being plundered in the newly conquered continent.

All this success earned unwanted attention when pirates – including Sir Francis Drake – repeatedly attacked it to ransack its wealth. In self-defense, the Spanish decided to build a fortress and erect fortified walls around the city.

They also constructed a system to control entrance to ships in the harbor and limited the networking of streets in town. By a century later, when everything had been completed, Cartagena had become the most protected city in South America and the Caribbean.

Why is Cartagena famous?

Inadvertently, the Spanish officials and European pirates had worked together to create a maze-like town now known as the “ciudad amurallada,” or “walled city.”

As one of the best preserved colonial cities in the Americas, UNESCO has named Cartagena a World Heritage Site, saying “the city of Cartagena de Indias boasts the most extensive and one of the most complete systems of military fortifications in South America.”

More about the architecture in Cartagena

Cartagena’s architectural charm follows the path of Colombia’s history. It begins with the Spanish, continues through Republican architecture and Spanish influences and finally adopts a more British style. As time progressed, columns came to replace arches, and bright colors made way for neutral tones.

This just goes to show how Cartagena is made up of many cultural influences. Even many of its best-known icons are not from Cartagena. But no matter. Everything works together to create a wonderful travel destination.

There are so many colorful buildings, colorful people and colorful street life in Cartagena’s historic center that It would take days to take it all in. Spending one weekend in Cartagena just isn’t enough time to appreciate it all. There are so many fabulous things to do and see there, and here’s a book to prove it!

If you visit the city, we think you’ll agree, and want to spend more time there. Cartagena is a city with a vivid past and an even brighter future.

Cartagena Icons That Are Not from Cartagena 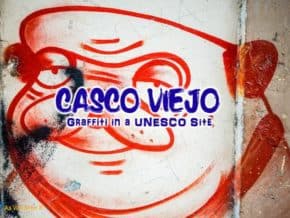