How to Prepare to Photograph Rothenburg

When I first laid eyes upon the itinerary for our Viking River Cruises trip from Budapest to Amsterdam, Rothenburg jumped off the page. It actually slapped me in the face so hard that I knew I had to learn how to prepare to photograph Rothenburg and capture it just as I have seen it so many times on Google, Pinterest and Instagram.

I knew about the iconic images of Rothenburg and the colorful half-timbered homes that greeted travelers through the centuries. But that just wasn’t enough. I wanted to know the town before my feet ever rested in it and well before my lens took in the glory of what Rothenburg ob der Tauber offered. So I also knew that many fellow travelers get so excited about a new place that they wished they had a canned approach to preparing to photograph it.

Here is what I did.

Table of Contents show
How to photograph any travel destination
1. Learn about the destination
What I learned about Rothenburg ob der Tauber
2. Study other photographers’ renditions
3. Review the lay of the land
4. List the iconic shots
5. Develop your personal shot list
6. Get your camera and GO
7. Take the iconic shots
8. Find a different angle or perspective
Finish up your shot list

How to photograph any travel destination

Using these steps will help you prepare to photograph any destination you choose.

Let’s look into this in more detail.

1. Learn about the destination

To learn more about Rothenburg, I began with Mr. Google and Wikipedia. Then I used “rothenburg tourist bureau” as a search term and checked the top official tourist information websites.

What I learned about Rothenburg ob der Tauber

Founded in 1274, Rothenburg ob der Tauber is a small town around 16 square miles in the Franconian region of Bavaria, Germany. The population is about 11,000 people and is well known for its well-preserved medieval heritage and a great destination for tourists from around the world.

Rothenburg ob der Tauber, meaning red fortress above the Tauber, is a well preserved town along the popular “Romantic Road” that runs through some of the mist beautiful countryside in southern Germany.

From Wikipedia I learned that Rothenburg has appeared in several films, most notably fantasies. It was the inspiration for the village in the Walt Disney Movie Pinocchio as well as for the Vulgarian village scenes in Chitty Chitty Bang Bang movie in 1968.

I also learned a very interesting story from World War Two: Rothenburg held a special significance for Nazi ideologists. it was considered the epitome of the German “home town,” representing all that was quintessentially German and a reminder to the peoples of Germany of the way the Nazis wanted them to live as a family and as a community. In other words Rothenburg simply exemplified this Nazi ideology in terms of an idealized family life.

Furthermore, because U.S. Assistant Secretary of War, John J. McCloy knew about the historic importance and beauty of Rothenburg, he ordered U.S. Army General Jacob L. Devers to not use artillery in taking Rothenburg. The final event saving it from total destruction by artillery was that local German military commander Major Thömmes voluntarily gave up the town, despite Adolf Hitler’s order that all towns should fight to the end.

American troops of the 12th Infantry Regiment, 4th Division occupied the town on April 17, 1945, and in November 1948 McCloy was named Honorable Protectorate of Rothenburg.

After the war, the residents of the city quickly repaired the bombing damage. Donations for the rebuilding were received from all over the world. The rebuilt walls feature commemorative bricks with donor names. Traffic-reducing measures were put in place in a significant portion of Rothenburg to increase safety and accommodate tourism.

The most iconic image of Rothenburg is the famous junction of Kobolzeller Steige and Spitalgasse. It is even depicted on the cover of two Blackmore’s Night albums, 1999’s Under a Violet Moon and their 2006 album Winter Carols.

Going into Pinterest I simply went to the search section and entered “Rothenburg” into the search. Hundreds of images soon appeared for review. I soon realized that the majority of the images were of that Kobolzeller Steige and Spitalgasse street junction.

Moving to Instagram I followed same process, entering Rothenburg into the search. I found a great deal more images, although the same iconic shot usually came up there as well.

Finally I used the “images” tab in Google search. I got the same results from this sight as well.

Tip: Spend time looking at the available images and understanding the light, color and the weather conditions. See how people seem to view the shots and learn what makes them so popular. The images appearing at the top of the Google search are the most popular. Why?

3. Review the lay of the land

Getting a map of the location and placing marks on it will greatly assist you in planning a route to get the best of your time. Sometimes, as with our trip with Viking River Cruises, you will be part of a group tour. In this case you would want to look at what the tour will include and plan accordingly.

From the map, learn the names of a few streets as you make your shot list. This too will allow greater ease in getting the job done, knowing what to expect as you go and not having to backtrack.

The icons of a city identify the place without words. For instance, when you see Big Ben, the Eiffel Tower or Times Square, you immediately know which city it is. When you have done your research and you know what subjects show up most; those are your icons.

Make a list of them and know where they are located in the city. In large cities making this list could be a rather heavy burden, but that will also help you how much time in a city will be necessary to catch at least the icons.

A shot list is a must when you plan on not missing anything. It is a terrible thing to get home and realize you missed something, especially when you are writing about your travels and want to show the results. The list should include the iconic locations to shoot along with other ideas you develop during your study time. I even listed various food items and customs of each location.

6. Get your camera and GO

Finally getting to the location you have prepared for is both exciting and a letdown. The excitement part goes without saying, but why the let down? Because now you are in the moment and it will pass rapidly.

You saw the differences in light, weather and people from what you studied. It’s as if you know the place like you have been there numerous times. Feet on the ground, loaded with extra batteries, it’s time to snap away and start shooting.

When you first approach a subject your mind already envisioned, take advantage of that feeling of excitement and take your photos right away. Get to the proper location where the iconic shots were taken and grab your very own.

Pay close attention to the light and weather. A unique aspect of travel photography is that both conditions are unpredictable. You have to be flexible and move right along with them.

I was able to capture the Kobolzeller Steige and Spitalgasse street junction in the rain and absolutely loved it. I must have snapped 30 shots very quickly.

8. Find a different angle or perspective

Afterwards, allow yourself to drift into the scene. Look for any various angles and perspectives that will lend to a unique image all your own. It is amazing how your mind can review what you have seen and lead you to a location that you did not see.

This is called working the scene.

Move around and capture from all possible angles you can. When you get home, you can always delete but you can never recapture. Work the scene carefully, then check it off of you shot list and move to the next shot.

Finished? Then go home and play in Lightroom. 🙂 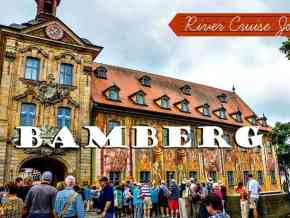 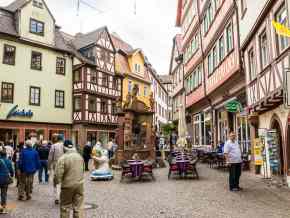 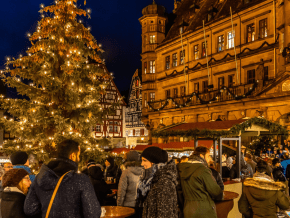 10 thoughts on “How to Prepare to Photograph Rothenburg”