How to Visit an Embera Indian Village in Panama 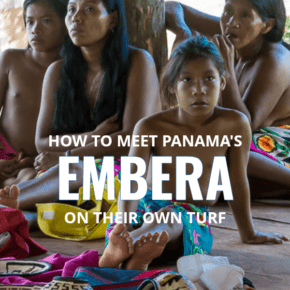 Do you enjoy experiencing local cultures when you travel? What if I told you that you could visit the indigenous Embera Indian tribe in Panama? You can either take a tour from Panama City or, for something a little more adventurous, visit a village in the remote Darien province.

We took a trip to an Embera Indian village while we were visiting the Darien Gap.

Our experience began with a motorboat ride up the winding Mogue River. The thick Darien rainforest grows right into the water around here. The jungle is so dense that the only sensible way to get from place to place is by boat.

ⓘ TIP: You can book a private jungle adventure in the Darien. Learn more here.

Table of Contents show
Our trip to the Embera village
Traditional Emberá dress
Embera handicrafts
Tour the Embera indian village through our photos
Want to visit the Embera yourself?
Want to read this later? Save it to Pinterest!

Our trip to the Embera village

Mogue (MOE-gay) is a traditional Emberá village in the Darién. Because of outside influences, it’s a curious mixture of modern conveniences vs. chickens running wild, a concrete schoolhouse vs. open, thatched huts on stilts, and t-shirts and jeans-clad children versus bilingual (Emberá/Spanish) adults who spend their days creating traditional handicrafts.

Every Embera home has electricity, thanks to free solar cells courtesy of the government. I don’t know if those cells can emit enough energy to power a refrigerator, but satellite antennas were everywhere.

We also heard radios all over the village being switched off as we entered. Perhaps they thought it would give us a more “authentic” experience, haha.

Yep, even though the village is isolated, it is still connected to the outside world.

Our tour began with a walk through the village with some of the local women. All were dressed in traditional outfits … with a modern twist.

Their traditional bark skirts have been done away with, mostly due to external pressure to “save the rainforest.” These days, their brightly-patterned skirts are made with a special $25-per-yard fabric. It’s made just for them … in China.

That said, most still adhere to traditional ways. Many of the older women there were comfortable topless, wearing nothing above the waist but a smile. Others sported wide necklaces or halters made of plastic beads. The outside world has influenced the younger girls, it seems, because many of the topless ones hid behind their arms and long hair.

Our best guess is that perhaps they would prefer to cover up, but their mothers won’t let them. My kudos to the girls for doing as requested.

Sorry, kids, mamas make the rules no matter where you live.

Trips to these villages are marketed as cultural experiences, and they are. However, a great part of Embera Indian Village tours is focused toward giving them an opportunity to sell their handicrafts. This is the best way to support their tribe and the local economy.

Embera men craft detailed carvings out of cocobolo wood and the women weave beautiful baskets of palm fibers. The most intricate ones will sell for hundreds of dollars, because they can take weeks—sometimes months—to create.

An Embera basket is the perfect souvenir of Panama: it’s a local, handmade item created for practical use. Unfortunately, baskets are very expensive in Panama City because the middle-man and shop add a markup. For us, buying a basket directly from the tribe meant that we could get two for the same price as one in the city!

Even though our guide said we could negotiate, I finally chose to pay the asking price. For one thing, the two women who had woven them would keep all the money. I have no idea how much they get for baskets that are sold in Panama City.

For another, those baskets take a lot of time to make. After doing the math, I realized that they would be making pennies per hour. And yes, I did end up buying two. My makeup brushes live in one of the baskets, and other receives Dan’s spare change.

Tour the Embera indian village through our photos

Have you heard the saying that “getting there is half the fun?” Well iIf that’s true, then these warm and friendly people must make up the other half.

Dan took a lot of photos from our trip to the Darien. You can see our photo album here. Here are a few shots from our adventure.

Want to visit the Embera yourself?

In order to preserve their way of life and share tourism income fairly, all visits are scheduled and evenly coordinated between the tribes. Therefore, outsiders need to take an organized excursion.

Here are some Embera tours to consider:

ALSO READ:
Crossing the Darien Gap: Here's How to Do It 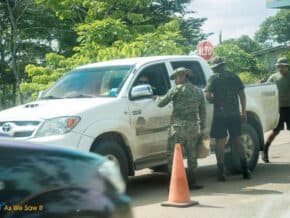 Crossing the Darien Gap: Here’s How to Do It 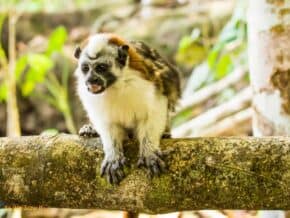