One Day in Alsace France

The nice thing about taking a cruise is that it gives you a chance to visit a lot of different places in a short time. That’s why I’m writing this series: So you can get a taste of the many places on a Rhine River cruise itinerary.

Maybe you’re dreaming of Germany or France, maybe even taking a river cruise … but you’re wondering: Is this how I’d like to spend my holiday? I hope our posts will help you decide if it’s for you.

Our day in Alsace began in Strasbourg, with a guided tour and free time to explore or shop. After lunch on board, it was time for a tour around Alsace.

The bus ride took us through some very pretty countryside and quaint villages. Along the way, we learned a lot of interesting things about the region. Who knew there are so many things to do in Alsace?

Still, I must confess that it was a little hard to focus on what our tour guide was saying because of all the eye candy outside the window.

ⓘ TIP:  If you’re staying in the Alsace region for a few days, there’s a 3-day Alsace Pass that looks budget friendly and convenient. It includes free admission to 31 castles, museums and other fun activities. Add it to your Alsace itinerary here.

It hasn’t always been “the Alsace region of France.” Because of its strategic location in Europe, Alsace has changed hands time and time again, three times in the last 100 years along. (You can see the timeline here.)

Briefly, the 1919 Treaty of Versailles forced Germany to give Alsace to France. Then in 1940, the Nazis took over and renamed it Gau Baden-Elsaß. Five years later, in 1945, France regained control. Alsace has been part of the French map ever since.

Alsace may be French politically, but Alsatian heritage and culture remain German.

Just as in Germany, homes here are steep-roofed and half-timbered—which is why we believe fairytale-like Colmar could have inspired Disney’s Beauty and the Beast. Natives don’t speak French, they speak Alsatian, which is a dialect of German.

Unless you’re a teetotaler, your Alsace itinerary needs to include a local winery. Kronenbourg beer may be brewed here, but Alsatian wine is far more popular. Alsace is known for its white wines, including Muscat, Gewurtztraminer, and Riesling. (Notice the German names?)

Ergo, our first stop was at Domaine Paul Blanck, a local family winery.

Robert Blanck, the owner, welcomed our group and escorted us down to the barrel room. This is a huge basement chock full of ancient-looking wooden casks. He showed us one that had been in his family ever since they first owned the winery, back in the early 1700s.

After so many years in the business of making Alsatian wine, his family has perfected all the techniques, even the latest ones. Yes, he said, some wineries use stainless steel tanks these days, but he still prefers aged oak casks. He believes that they give his whites a more complex character.

As we walked down the main aisle, wooden barrels towering overhead, Robert told us more about the terroir here. Alsatian soil has a high mineral content, which contributes to the wine’s distinctive flavor. Those minerals accumulate on the inside of the tanks to create a “wine stone,” which has to be scraped out of every cask at the end of each season. The barrels are so large that they have to actually climb inside to clean them!

Of course, our tour ended in the tasting room. (Don’t they all?) We were offered quite a few white wines to try. We could actually detect a hint of the minerals that had flavored the grapes, which really does add more complexity to the flavor.

Alsace has very strict rules about its grapes: Every vintner has to grow his own. There’s no buying grapes or mash from anyone else in Alsace, not even from your next-door neighbor.

As much as we wanted to buy a few of these delicious bottles to bring home, we had to resist. With another few weeks yet to go on our whirlwind European adventure, how could we carry them?

Yes, Virginia, the gingerbread that’s traditional in many homes at Christmas is still made the old-fashioned way in Alsace, and we visited the only bakery that does it.

Here’s a good one: This German bakery has a French name!

Here in Gertwiller, halfway between Colmar and Strasbourg, the Fortwenger workshops have been baking gingerbread the same way for 200 years. They are so very proud of their work, they’ve painted the building like a whimsical gingerbread house.

And look: Isn’t that Hansel and Gretel in the corner? They’re snacking on the building, right under the witch’s nose!

Scents of honey, ginger and cinnamon wafted through the air as we entered the bakery. The baker was hard at work, mixing up a batch of dough with his assistants.

Standing behind the steel table, our tour guide translated his explanation. Alsace has always been an important stop on the spice route. Naturally, gingerbread developed as a result.

Although a few bakeries specialized in gingerbread 200 years ago, Maison Fortwenger is now the sole repository of the Alsatian gingerbread tradition. It is sold in a handful of Alsatian shops under the Fortwenger label.

The baker passed around a tray with a variety of samples of the different types of gingerbread he was preparing, each one unique. We could detect star anise, chocolate, nutmeg, or clove in them. It was hard to choose a favorite!

Finally, he invited us to visit the gingerbread museum, which shows the history of gingerbread production and some curious objects of rural life.

While I took a look around the gingerbread shop (pricey but beautiful gift packages), Dan wandered around the museum. He was especially impressed with their collection of beer steins.

Back to the ship

All too soon, it was time to return to the ship. We’d seen so much, yet there was so much else we hadn’t had time for.

But there’s always time for food.

Flammkuchen awaited us as we boarded the ship. This is one of the most iconic foods from Alsace. It’s a lot like a crispy, thin crust pizza, but they use créme fraiche on it instead of tomato sauce.

That flammkuchen looked easy to make, and they promised that it is. I’ve since found a cookbook with Alsatian recipes on Amazon. Might try making it one of these days. 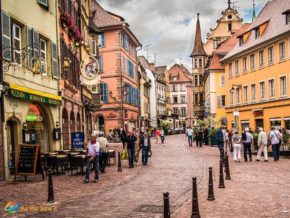 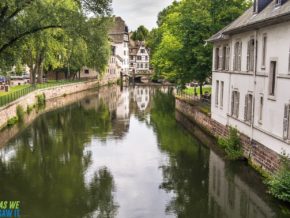 One Day in Strasbourg, France

2 thoughts on “One Day in Alsace France”