South America doesn’t seem to get the coverage other continents do. Perhaps that’s one of the reasons we decided to move here. Anyway, after a lot of prayer and thought, we finally decided that our next home would be Cuenca, a UNESCO World Heritage Site in Ecuador. (There’s another Cuenca in Spain, and it is a UNESCO site as well. Go figure.)

Sitting high in a valley in the Andes, Cuenca is Ecuador’s third-largest city … and some would say its prettiest. It also enjoys beautiful spring-like weather year-round, and is super affordable, all of which are reasons why the town a popular retirement destination for North Americans.

But that’s not what drew the Spanish Conquistadors in the mid-1500s. They were interested in the gold and trade they could get from the Incas living in the area. Cuenca grew up near the Incan town of Pumapungo,and even better, the second-largest city in the Incan Empire was not far away.

You can still visit Ingapirca on a day trip from Cuenca, by the way.

Why Cuenca is a World Heritage Site

UNESCO’s website listed a lot of reasons for designating El Centro as a World Heritage site. Long story short, Cuenca is a planned Spanish colonial city that began in 1557, right in the midst of the Renaissance era. So imagine Renaissance urban planning in the Americas.

The colonial center of Cuenca has been inhabited since it began, but what makes it unique is that it still retains the original formal town plan.

Cuenca’s El Centro is laid out on a strict grid of perpendicular streets that stretch out from Parque Calderón. This park is the main square, where the seat of the Town Council, the Office of the Governor, two cathedrals, and the Law Courts are located.

With all of the detailed woodwork on their façades, windows and doors, Cuenca’s buildings are charming. No matter where you walk you’ll find graceful ironwork balconies overhead.

El Centro is small enough to explore on foot and still has the cobbled streets from its colonial days. Sunlight manages to reach street level because of the low buildings and wide streets …

… but El Centro is just as pretty when its cobblestones are wet from rain.

Unlike some Spanish Colonial towns (like Cartagena), El Centro is not a touristy museum; it shows all the lived-in wear and tear that any place would have after all that time. And that gives it much of its character.

The various populations and cultures in the city have intermingled, so there are no specifically Spanish or indigenous areas. Cuenca is a blend of architecture from all the different societies and cultures that live here.

Plan your trip to Cuenca 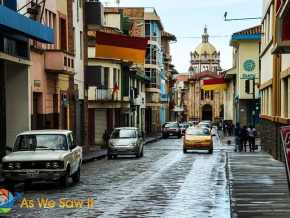 How to Find Long Term Rentals in Cuenca Ecuador 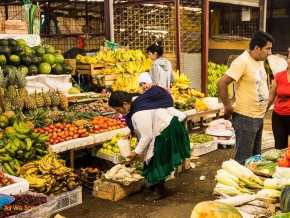 4 thoughts on “Why Is Cuenca, Ecuador a UNESCO Site?”