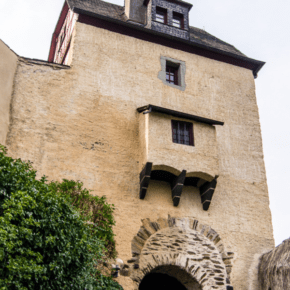 Braubach, a little-known town near Koblenz, Germany, has a surprise in store for its visitors: the best-preserved castle in the entire Middle Rhine Valley. Dating from 1117, Marksburg Castle is arguably one of the best castles to visit in Germany. That’s why so many Rhine river cruises include a Marksburg Castle tour on their itineraries.

Don’t let the “castle” part of its name fool you. This Marksburg edifice has nothing in common with Disney fairy tales, because it wasn’t meant to be a palace for royalty. Like most countryside castles, Marksburg Castle was intended as a fortress.

Europe’s countryside was the domain of outlaw bands who raided farms and villages to fill their pockets and stomachs. Landowners built castles to protect their harvest and hired hands. Local residents paid annual taxes for such protection, too.

Many medieval castles were built to “protect” key roads and rivers. Or more accurately, the landowners extorted tolls from anyone passing by. Rhine River castles were no exception.

There was no sneaking by these guys. They could watch them coming down the river in both directions.

For the most part, the dramatic castles that line the Rhine are Romantic Era reconstructions. Not so with Marksburg, which has survived conquests, Napoleonic rule, and two World Wars. Its construction is nearly all original.

Actually, it is the only Rhine river castle never to have been destroyed, so it has been continuously inhabited for more than 700 years.

Over the centuries, Marksburg Castle has grown bit-by-bit, though its original keep is still in the center of the complex. Most of the additions were for defense, which is obvious as you walk through the complex.

Can I tour Marksburg Castle on my own?

There’s no way to take a self-guided tour here. This best-preserved castle on the Rhine can be toured only by taking the 50-minute guided tour.

How do I get up to Marksburg Castle?

If you are driving, you can park in the lot at the top of the hill. Otherwise, you will need to take a taxi or walk. It’s a steep, 30-minute climb to the castle on foot, though.

How much does it cost to enter?

When is Marksburg Castle open?

Marksburg Castle is open year-round except for Christmas eve and Christmas day.
Summer season (late March through October): 10:00-17:00.
Winter season (November to late March) it is open from 11:00-16:00.

Only during the summer. There are two English guided tours daily, at 13:00 and 16:00. All other tours are in German, but international visitors can join the regular guided tour with a leaflet in their own language.

What about accessibility at Marksburg Castle?

Marksburg Castle is still in its original, medieval-era state. As it has not been updated, there is no elevator and you will need to navigate stairs. The castle is not accessible by wheelchair, and people with other physical disabilities may struggle with the uphill climb during the tour.

Marksburg Castle was a part of our Rhine River cruise itinerary. The company kindly bused everyone to the top of the hill. It’s a long walk and pretty steep, and the castle does not offer shuttle service.

We met our tour guide outside the first castle gate. She escorted us up the path and brought us to the gateway.

The gated entrance was designed to be tall enough for knights on horseback to gallop through. Then the owner realized that enemy hordes would be able to enter en masse. Wisely, he had the size of the gate reduced.

Once you’ve made it through the gate, you’ll come to a very well-worn staircase. Called the “Knights’ Stairway,” it’s made from slate.

These steps were carved with a rough surface to keep horses from slipping on rainy days. The stones are worn and uneven due to all those horses riding over it for 800 years. We learned the hard way: it’s easy to trip if you’re not careful. So watch your step!

The walkway winds uphill so you’ll get a bit of a workout if you’re not used to slopes. It passes under a bridge that was used for defense. It was a handy location for pouring boiling pitch on invaders.

Most of Marksburg’s defense construction was built to house its cannons. They were always aimed in the direction of the lower Rhine, so as to protect the nearby town of Braubach.

The oldest cannon at the castle dates from around 1500. It’s quite short, as cannons go. Interestingly, it loaded from the back and it had a limited firing distance.

By the time 150 years had passed, people started using bigger, more modern cannons. While they were much more powerful, they had to be front-loaded. This is why cannons were on wheels: so they could easily load them.

Wine, not beer, has traditionally been the preferred drink in these parts of Germany. Because castle water was unclean, everyone drank wine. Don’t get too excited about that though, because the wine was actually less alcoholic than today’s beer.

The pitchers on the wall held each person’s daily allotment. The bellows was part of the winemaking process.

This hall is actually a kitchen, including an oven big enough to roast an ox whole. The arms holding the pots have notches to control the heat.

Servants were expected to be unseen by the noble family. They were able to stoke the fire simply by opening the little metal door (in the photo below). The triangular chair was used to make the job more comfortable. But no, that’s not a backrest, it’s what the servant would lean on.

The bedroom was the only heated room in the castle. However, it came with a downside: The nobles were constantly exposed to smoke, and this caused chronic breathing problems.

If the bed looks short to you, it is. The occupants slept with their backs elevated, which helped them breathe. The bed’s canopy helped to retain heat at night, while the curtains blocked some of the smoke from the fireplace.

Our guide mentioned that the curtains also kept out critters, but didn’t go into detail. I don’t quite see how that would work, unless rats were climbing up to share the bed or something.

There was a deep window seat in the apartment, designed to let in maximum light for handwork and reading. Women would sit here and gossip (or “spin a yarn”) while doing needlework or working on the spinning wheel.

The privy/toilet was the most vulnerable and yet the most necessary room of all. It was also one of the most memorable things in the entire tour.

I had mistakenly assumed that the occupants used chamber pots for their waste, but no … they had an actual room for such important functions! It was little more than an upstairs outhouse, a small outhouse-type seat in a tiny room that stuck out from the side of the building. The privy was positioned over a pigsty that, I assume, took care of any – er – droppings.

This is probably the only bathroom I’ve ever seen that locks from the outside. A clever idea, actually, because was such a weak point in the castle’s defenses. Every potential invader knew that the toilet room would provide easy access to the building. All they had to do was use a ladder and climb through the opening on the bottom.

The outside lock solved that problem.

Marksburg Castle was actually a community, and lots of people lived within its walls. Every castle of the era had a chapel for the residents. Marksburg, in fact, was named after St. Mark so its chapel was dedicated to him.

This Gothic-style chapel has beautiful frescoes of St. Mark as well as the lion that symbolizes him. It also has many other Biblical scenes. I was surprised at how brilliantly colored and well preserved they remain.

From thinking of heavenly things to thinking of war, we ended up in a museum. This one displayed all sorts of armor dating from Celtic times.

Here’s something I learned on this tour: The present-day military salute comes from how knights and soldiers used to greet each other. They would raise their visor with their right hand in order to reveal their identity and show that they were friendly.

And of course, there’s another form of armor.

Yes, folks, that’s a chastity belt, a medieval lady’s “armor,” haha. Despite its reputation, its real purpose wasn’t to keep a woman chaste while her husband was away. Women actually used it to protect themselves from assault when traveling.

Our last stop on our tour was the stables. Since the castle had been used as a prison in times gone by, it stands to reason that they’d show off some torture devices. Everything from pillories to face masks.

Not sure why they put it in the stable, though.

Here’s a mask with a heavy ball. It forced its wearer to crawl down where all the mud and animal droppings were. Nasty.

The power of suggestion … pictures like these would be intimidating enough to make anyone confess, guilty or not!

Other things to do at Marksburg Castle

After you finish your tour, you’ll be able to visit a gift shop. Unlike some places that sell a bunch of kitsch, Marksburg’s gift shop actually has some pretty nice souvenirs.

Sure, you’ll find some kitsch here, but the shop also has tons of good stuff. They sell postcards, posters, books, local art, and fun toys like shields and swords, princess and knight outfits, etc. That said, my favorite was a paper book. You can cut out and glue the pieces together to make your own scale model of Marksburg Castle.

ⓘ TIP: The gift shop will carefully wrap and ship your purchases if you don’t have room in your suitcase. That’s reassuring if you’ve found something special. You won’t risk its being broken or stolen during your trip.

If you need a bite to eat, you’ll find a cafeteria-style restaurant (Marksburgschänke) right next to the gift shop. The panorama terrace offers spectacular, unspoiled views of the meandering Rhine and its valley. You can see for miles and miles. It can be mesmerizing to watch the cruise ships, barges, and boats as they sail the river.

You will also find a picnic terrace right next to the castle – perfect for self-catered snacks and lunches. 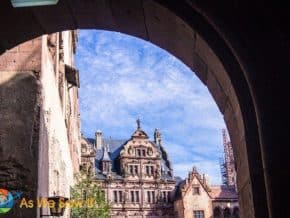 A Quick Tour of Heidelberg Castle 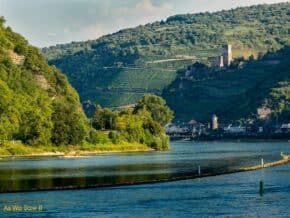