Way up in the north, in the little finger of Israel that squeezes between the Syrian and Lebanese borders, is a beautiful spot of heaven known as Tel Dan Nature Reserve. Holding the remains of a 5000-year-old city, Tel Dan is one of the most important archaeological and historical sites in Israel.

Often little more than a hill or mound, a tel is what is left of an ancient city. The ancient city that stood here during the time of Solomon was the northernmost city of the Kingdom of Israel, “They renamed the town Dan after their ancestor, Israel’s son, but it had originally been called Laish.” (Judges 18:29)

Few foreign tourists visit the Tel Dan Nature Reserve, but it’s a very popular place among Israelis. The locals love to picnic here, hike the forests and trails, and enjoy the refreshing waters of the Dan River.

And no wonder! With so many waterfalls, wading pools, and lush foliage, it’s delightful.

We stopped to sample the water from one of the many springs in the park. They are the source of the Dan River, whose clear waters flow into the Jordan River and on to the Dead Sea.

Sure it’s beautiful, but Tel Dan is also the site of extremely important archaeological discoveries. Excavations there have exposed some really important finds:

Dan in the Bible

The city was standing before Abraham, and even before Sodom and Gomorrah, when it was known as Laish. It was the northernmost city in the Biblical land of Israel. It wasn’t important in history until the power struggle after King Solomon’s death – around 930 BC – when the nation split into the two kingdoms of Judah and Israel.

At this point, Dan became a center of apostasy and Baal worship:

26 Jeroboam thought to himself, “The kingdom will now likely revert to the house of David. 27 If these people go up to offer sacrifices at the temple of YHVH in Jerusalem, they will again give their allegiance to their lord, Rehoboam king of Judah. They will kill me and return to King Rehoboam.” 28 After seeking advice, the king made two golden calves. He said to the people, “It is too much for you to go up to Jerusalem. Here are your gods, Israel, who brought you up out of Egypt.” 29 One he set up in Bethel, and the other in Dan. 30 And this thing became a sin; the people came to worship the one at Bethel and went as far as Dan to worship the other.

Besides leading them into worshiping other gods, Jeroboam also changed the calendar:

32 He instituted a festival on the fifteenth day of the eighth month, like the festival held in Judah, and offered sacrifices on the altar. This he did in Bethel, sacrificing to the calves he had made. And at Bethel he also installed priests at the high places he had made. (1 Kings 12:32 NIV)

No wonder Dan was the first city the Assyrians targeted when they invaded Israel. God was really ticked.

When we visited the site, we focused on the temple complex. It is extremely central in Israel’s history. We got to the temple by going past 4000-year-old stone walls. They are still standing because they had been buried for millennia, only revealed during excavations.

We passed through a city gate

… and along a very well-preserved walkway.

We passed some foundations of homes, still with cisterns and grinding stones.

And finally arrived at the “high place” and altar at the worship site.

This is the cultic site where Jeroboam, king of Israel (northern tribes), placed one of the two sacred calves that would lead to Israel’s future captivity by Assyria.

A huge metal frame shows the size of the altar, upon which the golden calf once stood.

The nature reserve has incredible views

A little further on, a spot offers fabulous views of nearby Syria.

Our friends pulled out their shofars and played a tribute to Hebrew history. 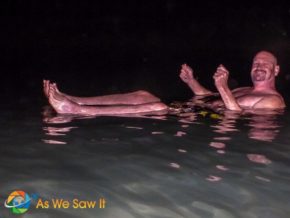 How to Swim in the Dead Sea 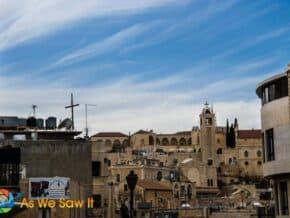 10 Cool Things to Know About Bethlehem 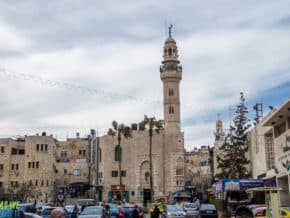 Visiting Bethlehem on a Day Trip from Jerusalem

All content copyright © As We Saw It, all rights reserved. Be nice, don’t steal. For more information about using any images or text, send an email to contact [at] aswesawit.com.
327 shares