Places to stay during your trip

Santa Fe Panama is a traditional town in the Veraguas Mountains. It sits smack-dab in the middle of Panama and makes an ideal getaway from the hubbub of Panama City life.

Veraguas is the only Panamanian province that spreads from coast to coast. It touches both the Pacific to the south and the Caribbean to the north. (Yes, north and south. Check it out on a map yourself; I’m not joking!)

Most people who plan to visit a town do a bit of research on Google beforehand. Here’s a tip: be sure to use the term “Santa Fe Veraguas” or “Santa Fe Panama,” because otherwise Google will assume you’re talking about the capital of New Mexico. We’re talking Panama here, people … and actually, Panama has two! (The other is in Darien, but it’s so far removed from civilization that no one bothers to go there.)

Getting to Santa Fe Panama

If you are lucky enough to have access to a car, it’s an easy, 3-hour drive from Panama City. Just head west on the Pan American Highway. When you get to Santiago two hours later, turn right and drive inland (north) to Santa Fe itself.

On the other hand, if you are relying on public transportation, it is just as easy to get to Santa Fe but the trip will take longer. Panama has an extensive and affordable bus system. You will take a bus to Santiago from Albrook Terminal and then transfer to a bus heading to Santa Fe. The bus ride will probably take about 5 hours.

Either way, once you leave the four-lane highway in Santiago, the road will wind north into the Veraguas Mountains. The drive is spectacular, so keep your camera ready.

Tip: If you’re driving, you might want to allow extra time for photo stops.

The town of Santa Fe itself

Like most towns in Panama, Santa Fe has all the modern amenities: electricity, clean drinking water, and high speed internet. But don’t let the modern conveniences fool you: Santa Fe is a traditional Panamanian town, complete with a laid back attitude, where horses are still commonly used.

As a matter of fact, we had a pleasant and unexpected surprise while we were hiking. Six cows and their escort came our way. We sure don’t see that in Panama City! 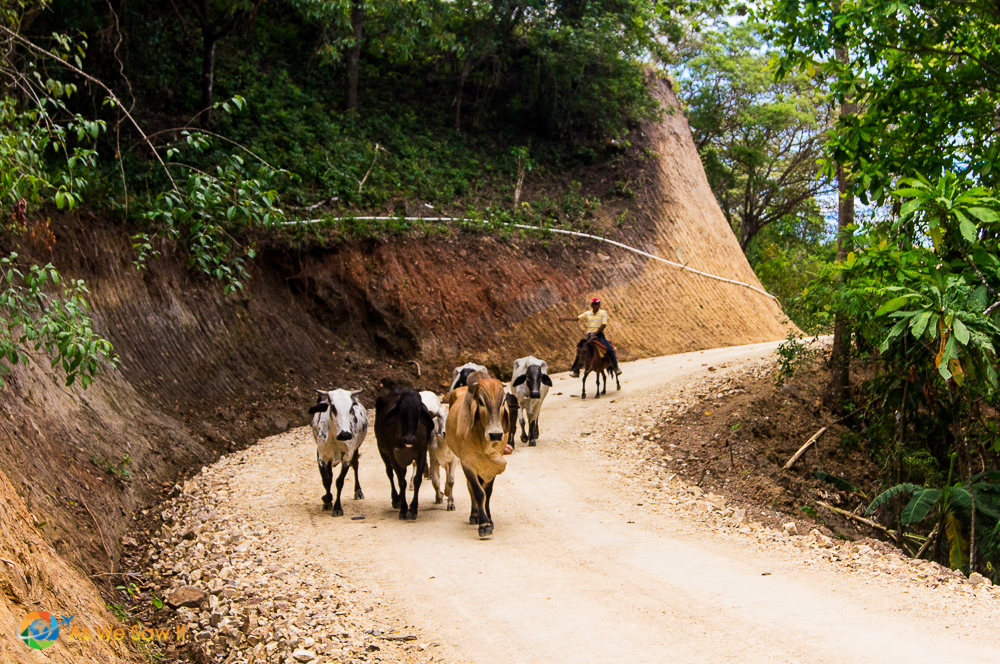 What to do in Santa Fe

The true charm about this town is that it is a place to get away from it all and enjoy unspoiled nature. While we were there we hiked to a waterfall, went swimming, tubed down one of its rivers, and visited an organic farm. Other options in the area include horseback riding, bird watching, 4×4 adventure tours, orchid gardens and even hiking to the Caribbean coast, but there’s only so much one can fit into a weekend.

We also enjoyed a truly memorable dinner when we ended up at a local place that was grilling an entire side of veal. Fresh, grilled meat eaten al fresco with locals. What could be better?

Although some of the rivers look low in these photos, don’t let appearances fool you. It can be deceptive. They can become quite dangerous during rainy season (April-November), when they channel rainwater from the mountains and quickly become rapidly running torrents of water. Any time there are large areas of rocks along a river, it’s a pretty safe assumption that those areas often flood.

We had traveled to Santa Fe with our two Dutch friends, Farieda and Linda. They love to hike as much as we do. It was such beautiful weather when we awoke on Saturday that we decided that it would be nice to spend a few hours walking in the mountains. We got directions to a swimming hole with a waterfall, and off we went.

We came across this footbridge along the way.

Santa Fe has its share of paved roads and concrete bridges. This is one of the typical footbridges that locals use to cross rivers in rural areas.

As we walked along we found plenty of great photo opportunities, including this view up the Santa Fe River from the foot bridge. If you take any photos from one of these bridges though, make sure no one else is walking on it or you will be making bouncing photos!

Cattle farming is the main source of income in this area, but as you can see bananas also grow here. I wonder if they may be a remnant from the days when Chiquita bought its bananas from Central America and Panama was known as a “banana republic.” Oddly enough, Panama became a financial giant in the region only after Chiquita left the country.

That said, although most construction in the country is of concrete or wood, many local campesinos (peasant farmers) are still resourceful enough that they prefer to build their own houses out of free local materials.

This was such a rural area that the only major sign of technology we found on our hike was this single, random phone booth. We guessed that it was installed so the campesinos would be able to contact the outside world in the event of an emergency. 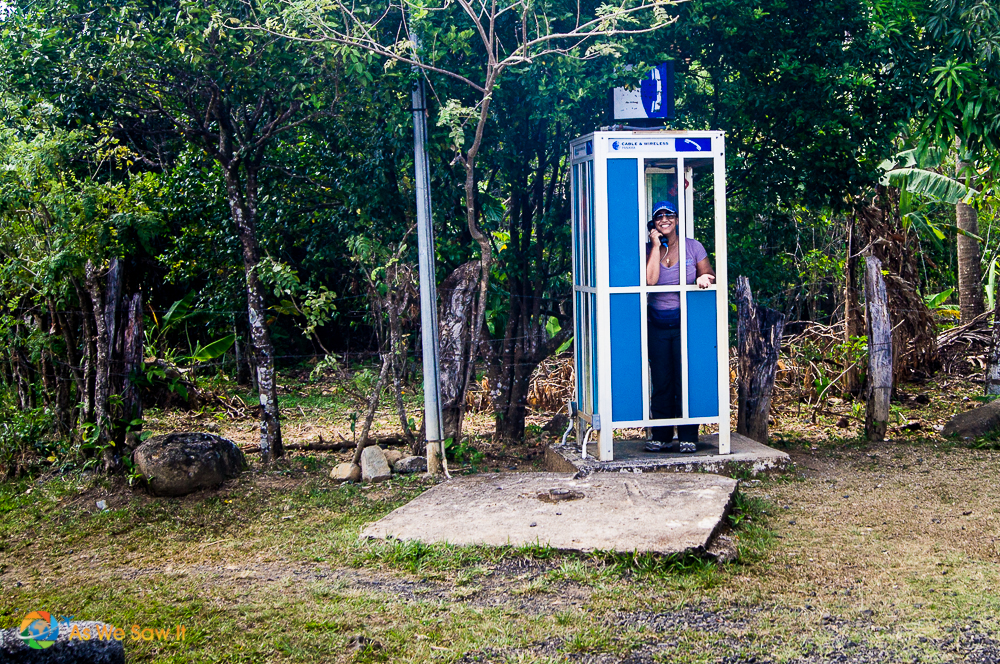 At our Veraguas swimming hole

After a long, hot and dusty hike our path finally approached the swimming hole. Unfortunately it ran along the top of a high ledge of rocks. With rocks at the shallow bottom it was obvious that we couldn’t lower ourselves or jump into from that side. Locals had beat us to the swimming hole and their waves indicated that we would need to enter from the far side.

So we followed the path further. It climbed for about 20 feet before leveling out at the top of the waterfall. 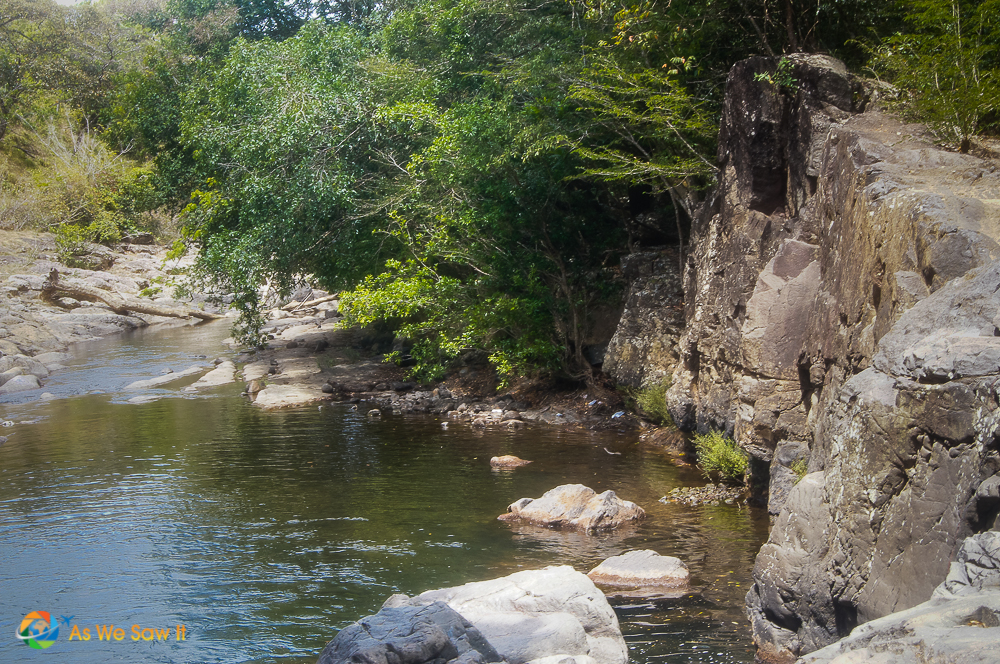 Looking back at our future refreshment, before we began our climb.

The water was moving quite hard and fast at the top. It seemed more sensible to cross from rock to rock than try to walk through the water and risk falling. Unfortunately, we found out the hard way that those rocks were far more slippery than they looked. It was a good thing we were hiking with friends, because Linda slipped. It took all the strength of two of us to pull her out of the rapids before she was carried down the rocks and over the edge. The force of that rushing water was a lot stronger than it looked! 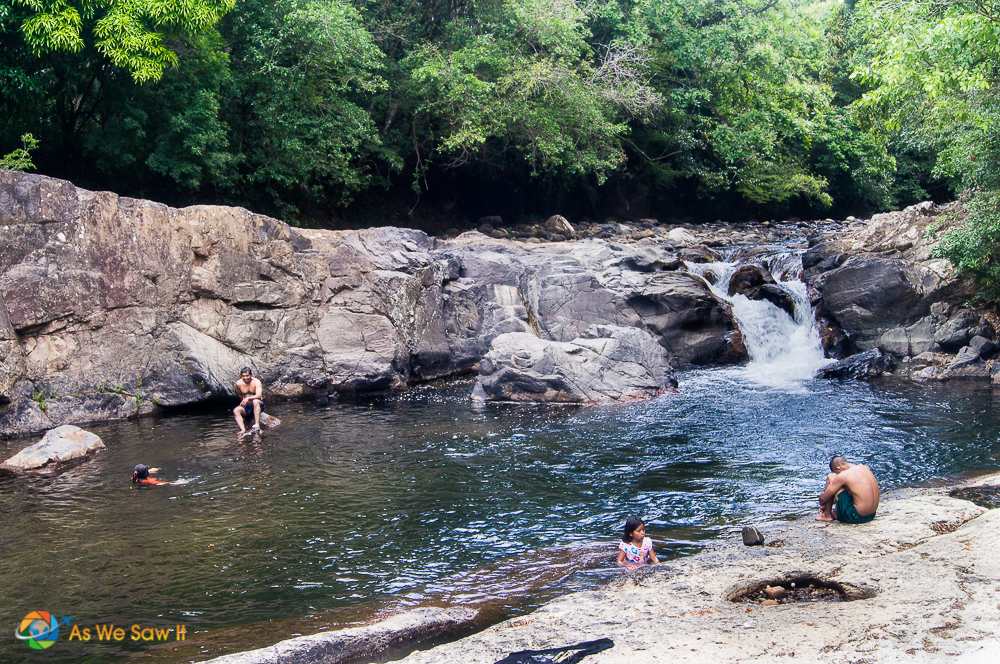 Everyone, even Linda, who had to slog all the way back in her sopping wet sneakers, agreed that our hike was worth the effort.

Professional photographer specializing in street, food and travel shots at As We Saw It travel blog. "Photography is unique in that it captures light in all forms, and since the Bible says YHVH (God) is light, photography captures Him in many forms." 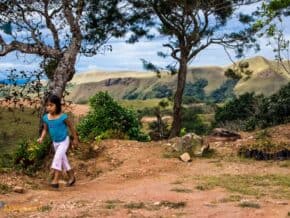 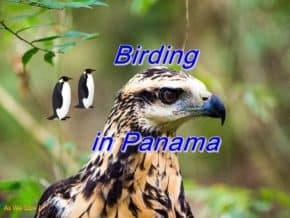 Can You See Many Birds in Panama?