When you visit Panama, make sure you carve out time for Panama Viejo. Lying on the seafront outskirts of city, Panama City, the ruins offer some fascinating insights into the country’s history.

Why is Panama Viejo important?

Panama Viejo was the first permanent European settlement built on the Pacific coast of the Americas.

Thus, the ruins were declared a UNESCO world heritage site in 1997. The old city contains “an exceptional testimony of colonial town planning; while the ruins of its cathedral, convents and public buildings highlight the unique technological and stylistic characteristics”.

Bottom line: Recent excavations have resulted in valuable insights into colonial life at the height of Spanish imperial power. For historians, that’s a very big deal.

Why and when was Panama Viejo built?

This settlement was founded in 1519, while the Spanish were in the process of conquering South America. They needed a port on the Pacific side of the continent because of all the gold and silver treasures they were looting from the Incas.

When it was built, it was simply called Panamá. Nothing old about it.

Anyway, once the Incan gold arrived in the city, mules brought it on the Camino Real, which was the cobbled road that connected Panamá to the Caribbean port of Portobelo. From there, everything was loaded onto Spanish galleons and shipped to Spain.

Who attacked Panamá Viejo, and why?

All that gold was way too tempting to ignore. On January 28, 1671, Captain Morgan attacked the city and wiped out the Spanish. Not wanting Morgan’s forces to occupy their city, the residents sacked it themselves and fled. Read more about the attack here.

Survivors built a new community on a peninsula not far away, which we now call Casco Viejo. (“Old Town.” Lol … that’s funny, isn’t it?)

ⓘ Morgan was arrested and charged, because his attack had violated a peace treaty between Spain and England. He was later released after proving he had been unaware of the treaty.

It may not look like it, but the entire Panamá Viejo Historical Monument Complex is huge: 57 acres. It’s the most funded archaeological site in the country.

When we first moved to the city in 2010, the ruins amounted to little more than a ticket booth, a fenced area around the tower and a dilapidated building where locals sold their crafts.

Since then, the entire area has been refurbished. Now, it’s one of the best tourist attractions in Panama City.

ⓘ RELATED: 15 Best Things to Do in Panama City

The Panama Viejo ruins cover a range of structures. You’ll find everything from the City Hall and cathedral, to a hospital, houses, shops, and religious buildings (churches, abbeys, and convents) for the Jesuits and Franciscans.

That said, the two best preserved structures are the convent and the old cathedral bell tower. While the tower was in use, it served double duty as a lookout tower.

Sure, you can see the buildings from outside of the fence, but it is worth buying a ticket to go in. Not only is there a great view from the tower, there are informational plaques all around the area that explain a lot more about the site.

We always enjoyed a relaxing walk through here, especially when the paths passed under the cool, leafy canopy. In such peaceful surroundings, it’s hard to imagine the mayhem that occurred when the city was actually being attacked and sacked by Captain Morgan.

If your knees can manage it, don’t miss a climb to the top of the 30-cathedral tower lookout. It’s a don’t-miss. You can easily see the tall buildings of Panama City from the top, as well as get a bird’s-eye view of the bits and pieces left of the old ruins.

When you visit, it’s best to begin your visit at the museum. This will give you a better understanding of what you’re seeing when you visit the ruins.

The museum highlights the history of Panama Viejo

Our favorite thing at the museum was a mockup of what the city looked like in the 16th century. It had a huge main plaza, and avenues and streets following the same grid layout they were using in Europe at the time.

We’re not sure how large it was back then, but as many as 8000 people lived there in its heyday.

The shops are in the same area as the museum and are full of local color and flair. Even the building reflects the colorful tribes that were native to this land.

From hand carved figurines to stunning molas and Embera baskets, you can find what you want in practically every color.

You can be assured that all the crafts are handmade by local artisans.

Both facilities are closed on Mondays, but you can still visit the ruins path that day.

How much time to visit to Panama Viejo?

Panama Viejo’s grounds are extensive. It’s worth taking the time to walk the one-mile (1.5 km) circuit around the complex.

Plan on spending about two hours if you wish to see the ruins and visit the on-site museum. Add extra time if you’d also like to check out the handicrafts in the shopping building.

What to bring when visiting Panama Viejo

Panama is hot and its sun is strong, so don’t forget:

Is it safe to visit Panama Viejo?

Panama Viejo is located in the Parque Lefevre neighborhood. It’s a poor neighborhood, but the complex is safe to visit.

Pin this to your travel board.

Professional photographer specializing in street, food and travel shots at As We Saw It travel blog. “Photography is unique in that it captures light in all forms, and since the Bible says YHVH (God) is light, photography captures Him in many forms.” 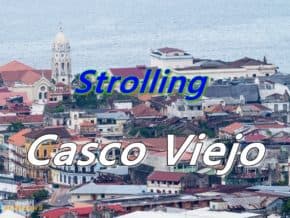 Strolling Through Casco Viejo in Panama

All content copyright © As We Saw It, all rights reserved. Be nice, don’t steal. For more information about using any images or text, send an email to contact [at] aswesawit.com.
110shares