It’s Not All Roses on Bali 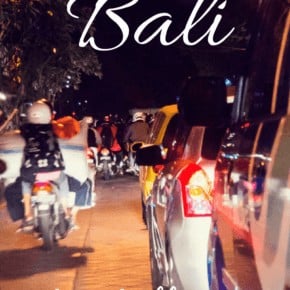 Relocating has its ups and downs, but when it’s relocating overseas, there are a lot more ups and a lot more downs. I already shared a few of the cultural differences I encountered in Bali, but that wasn’t all I learned there. Here are 3 more lessons I received.

I haven’t done any laundry or cleaning since I arrived, and neither has Dan.

Every day, two women come early in the morning to wash last night’s dishes, sweep and mop the floor, clean our bathrooms, change the linens, do the windows, and generally make the place livable. We also have a gardener, who also comes morning and evening to maintain the pool and remove any leaves or flowers that may have fallen from the frangipani trees overhead.

Although our landlord includes these services, others hire full-time help for as little as $200 a month.

It’s true what they say: Labor is cheap overseas. Our maids take our clothes and linens to a laundry service whenever we ask. We can get a week’s worth of laundry washed and folded for about $5.

When I needed a cleaning, we were shocked to discover how cheap dental work is, I was pleased to see my clinic had Western facilities and fastidious hygiene practices. I struck up a conversation with an Australian in the waiting room and soon learned why so many fly to Bali when they need dental work: His wife was getting a tooth implant for $200.

When Dan mentioned that he’d lost a large filling, the dentist filled it as part of the exam. No extra charge. Not bad: a cleaning plus filling for nine bucks! (Update: prices have increased since then, so don’t get your hopes up.)

Attitude adjustment time. At first we thought we were taking advantage of the locals, but after living here for a bit we’ve changed our minds. The salaries are what they are used to, what they have come to expect, and they think it’s a fair price. Consider the plight of a woman I read. She was paid a Western maid’s salary for years and became accustomed to it. When her employer left, she refused to work for less, and has been unemployed ever since. So who’s doing who a disservice?

Cheap labor? I could judge it by American standards and say, yes. By local standards, not at all. It’s fairly-priced labor, and it works.

The easiest way to get around Bali’s tourist areas (Kuta, Seminyak, Sanur, etc.), is to flag down a Blue Bird Taksi. The first two kilometers cost just 5000 Indonesian rupiah (IDR), which is about 60 cents. Our last trip to the grocery store cost 47,000 IDR ($5), due not so much to the distance as to the traffic.

Traffic in Bali is … er, different. There are as many motorcycles/motorbikes as cars on the roads and the bikers weave between and around cars with abandon. If there’s a way to keep going, they’ll find it … even if it means going up onto the sidewalk to do it.

Drivers are no better. On the major airport bypass road, which is two lanes in each direction, you’ll often see cars four wide during rush hour. It seems no one observes the lines in the road and the adjacent gravel shoulders frequently become another lane for cars and cycles.

I nearly freaked the first time I rode with Vonce’s brother. He decided to turn left, directly in front of oncoming traffic. I fully expected our car to be broadsided but instead, they stopped and waited. No big deal. (What? Back in America someone would be threatening a lawsuit!)

Attitude adjustment time. We’re getting used to Indonesian driving. Forget what you learned in Driver’s Ed. Here’s the way it works in reality:

For all the apparent confusion, Balinese are decidedly calm drivers. Balinese don’t honk, they beep. Beep, I’m coming around a blind corner. Beep, taksi available, do you need a ride? Beep, heads up, I’m driving around you. On those rare occasions when I’ve heard an impatient Honk, it’s always been a Westerner at the wheel. Not quite sure what to make of that! 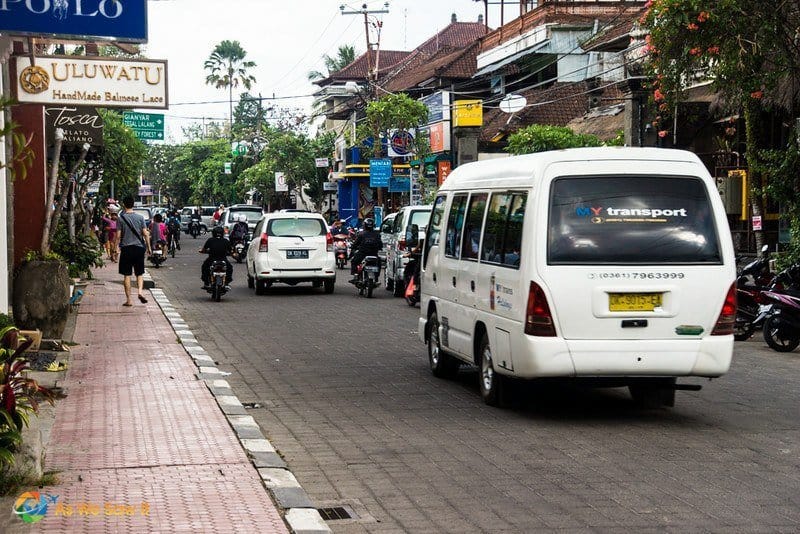 Taking our lives into our hands with a motorbike

We finally tired of relying on Blue Bird Taksi and rented a motorbike. The cost was 700,000 IDR per month, which comes to about $75. Interestingly, they didn’t ask for a deposit or driver’s license. They just Dan’s asked for his passport number, our villa’s phone number, and the first month payment up front.

We are now learning how to go with the flow of traffic.That means it’s OK to drive between cars anytime you want, just as long as your mirrors will clear the space. I’m not sure we’ll ever feel comfortable driving on the sidewalk, though.

We had to stop too suddenly last week and took a spill. God was good: There was no oncoming traffic. Witnesses ran to fuss over us. They wanted to make sure we were okay and the bike had survived. Thankfully we don’t have any permanent injuries, just a few bruises and a couple of skinned knees and elbows.

Yes, motorcycles are ridiculously cheap to buy here. That is one adjustment that’s easy to make!

Places you can stay at in Bali 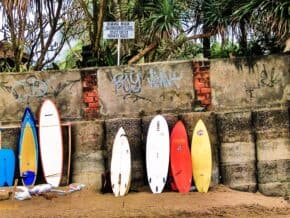 5 Thoughts on Living in Bali as an Expat

Confessions of a Coffee Snob

4 thoughts on “It’s Not All Roses on Bali”

All content copyright © As We Saw It, all rights reserved. Be nice, don’t steal. For more information about using any images or text, send an email to contact [at] aswesawit.com.
104 shares