If you are planning a trip to the Adriatic Riviera but dread being closed in by Dubrovnik’s ancient city walls, there’s a refreshing, wooded alternative nearby where you can breathe fresh air and relax. Just south of Dubrovnik is a small harbor town named Cavtat. Though travelers have been going there for years, it was a discovery to us. We’d not have known it if our driver hadn’t recommended that we drive a few minutes down the coast to see it. Cavtat: More than a Dubrovnik alternative, it may be its polar opposite!

Dubrovnik may be the Pearl of the Adriatic, but Cavtat (pronounced tsavtat) is a pearl in its own right. It is the complete mirror opposite of busy Dubrovnik. We’re talking about a laid-back vibe, no tall buildings, no crowded streets, plenty of greenery, birds and flowers, and a view of the sparkling Adriatic from practically every place in town. Before the war it had a reputation as an exclusive retreat for wealthy Croatians and as a thriving hub for working artists, and is now developing as a resort for foreign tourists.

Tip: If you’d like to see it on your own, buses and ferries run between Cavtat and Dubrovnik all day long.

When we arrived, our driver dropped us off at the bus station and suggested that we visit a well-known mausoleum, high on top of a nearby hill. He’d be waiting for us. We took a few minutes to enjoy the sight of fishing and tourist boats bobbing next to sailboats and motorboats, then crossed to the Visitor Center. The friendly attendant gave us a map and told us that yes, the mausoleum is worth seeing. The map brought us to a wide waterfront promenade fringed with palm trees and cypress. This was obviously the cosmopolitan center of the town she’d mentioned, known as the Riva.

Locals and tourists sat on benches and watched us dodge souvenir racks of postcards. We ignored the shops selling cheap T-shirts and ashtrays sporting the Croatian flag and continued on. I forced myself to ignore the flashes of silver and white as waiters prepared their outdoor tables for lunch. It would have been nice to sit at a table overlooking the water, but it was a little early and we had agreed to eat in Dubrovnik, anyway.

Because Cavtat is on a peninsula (actually, two peninsulas) it’s next to impossible to get lost. The promenade becomes a walkway that runs around the peninsula all the way back to the bus station. It passes beaches and small pathways though, so be prepared for the temptation to take a detour or two.

At the far end of the shopping area we found a church and stopped for a peek inside. I would have liked to spend more time here enjoying the art. Many valuable paintings decorate the interior, including one from Croatia’s famous painter, Vlaho Bukovac. (If you’re an art fan, there’s a gallery of his work in town as well, but I can’t tell you much about it since we didn’t stop there.)

See the lectern? There’s a hand sticking out from it, holding a cross. Seems to me somebody has a sense of humor.

Exiting from the quiet church back into the bright sunshine, we turned to begin our ascent to the mausoleum. We might have tried to follow one of the cobbled streets to the top (not sure) but … since we knew the mausoleum was at the top of the hill, it seemed easier to just follow a stairway between some houses. If we kept heading upwards we knew we’d arrive there eventually.

There are far too many photos to share here. You’re invited to see more of them in our Cavtat photo gallery.

When we finally arrived at the top of the hill, we found ourselves in a forest, fragrant with herbs and flowers. No one had hinted that this end of the peninsula is given over to semi-wild parkland! In just minutes we’d stepped from a forest of houses, streets and stairs into a peaceful world of bird song and greenery. We stopped for a few moments to enjoy the quiet and then continued on. We found ourselves in a small graveyard, with a spectacular view of the Adriatic. The mausoleum turned out to be an octagonal white dome with huge bronze doors decorated with gargoyles of dogs, eagles and winged lambs. A woman was sitting in the shade outside of the mausoleum’s doors, charging for entry, so we chose not to pay to see the sarcophagi.

The view was enough of a reward for our effort. We could even see Dubrovnik in the distance. The trip back down the hill was prettier than the walk up. Between the sand-colored walls we could see the traditional red roofs of Cavtat and the luminescent blue water. Coupled with the clouds of white, fuschia and pink bougainvillea blossoms that spilled over the tops of walls, it was a riot of color. I’m sorry the photos don’t do it justice.

Back at the water we admired the boats as we looked for Jim and Celia. It was time to head to Dubrovnik and see what the town was like. As I said in my previous post, you can see a lot in one day in Dubrovnik. I’m glad Cavtat was part of ours. 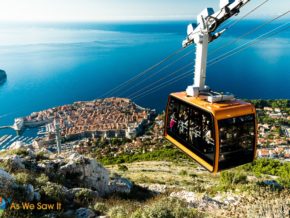 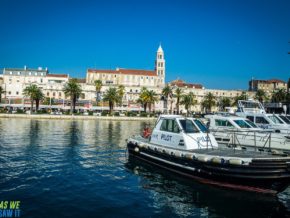 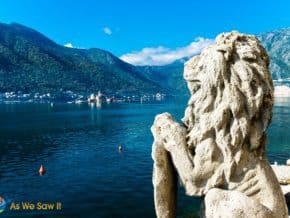 Best Things to Do in One Day in Kotor, Montenegro

All content copyright © As We Saw It, all rights reserved. Be nice, don’t steal. For more information about using any images or text, send an email to contact [at] aswesawit.com.
132 shares