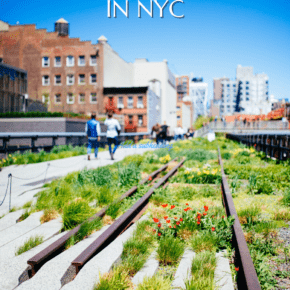 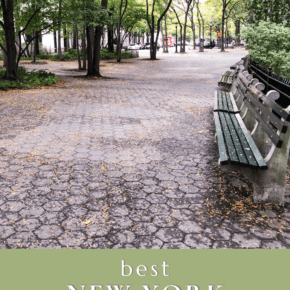 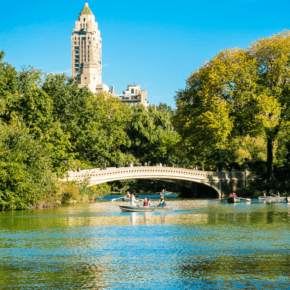 With endless things to do in the Big Apple to keep you busy, sometimes you just need a bit of serenity and calm. Thank goodness that the 5 boroughs aren’t all concrete jungle—there are over 1,900 parks in New York City to escape to.

When it comes to parks, New York City is hard to beat. The NYC Parks Department is responsible for more than 30,000 acres of land—which means that 14% of New York City’s total area is green space!

With such an abundance of parkland in every borough, you’ll find spots ranging from tiny pockets of greenery with a few benches to sprawling parks with playgrounds and sports fields.

Whether you want to go on a romantic date or you simply need a place to take your dog for a walk, you have endless options. Maybe too many. So in this blog post, I’m going to share what I consider to be some of the best parks in NYC. In this article, I’m focusing on Manhattan and Brooklyn to help you avoid getting overwhelmed by all the choices.

Central Park may not be the biggest park in New York City, but it’s certainly one of the most popular. An estimated 42 million people visit Central Park every year, making it the most visited urban park in the country. It’s also the most filmed location in the world, with 532 movie credits.

Central Park was designed by Frederick Law Olmsted, a renowned landscape architect who created many famous landscapes. He designed the grounds around the United States Capitol building and the Biltmore Estate in North Carolina.

New Yorkers love to skate, run, and walk the endless series of paths that run along grassy meadows, gentle hills, serene lakes, and rocky cliffs. But the park has more to offer, including fountains, a zoo, an antique wooden carousel, and even a castle. Central Park is one of the best parks in NYC to people-watch, take a stroll, or simply enjoy the scenery.

In the summer, you can boat on the lake, catch a concert, or watch Shakespeare in the Park. And in the winter, you can go ice skating on the frozen lakes.

Located at the southernmost tip of Manhattan, the Battery (formerly known as Battery Park) is a 25-acre park that offers what I consider to be the best views of the Statue of Liberty, Ellis Island, and the Brooklyn Bridge.

The park was named for the artillery batteries that were once stationed there to defend New York City. Today, it’s a beautiful oasis with gardens, playgrounds, and public art with statues honoring soldiers, explorers, inventors, and immigrants. It’s also home to Castle Clinton National Monument—a fort that was built in 1811 to protect New York Harbor and served as America’s first immigration station until Ellis Island opened in 1892.

Battery Park is best known as the place to catch the ferry to Ellis Island and the Statue of Liberty, but it’s also a great place for a picnic, people-watching, or just enjoying the views of New York Harbor.

The High Line is a unique park in New York City—it’s actually an elevated railway that has been converted into a public park.

The High Line stretches for more than a mile and a half on Manhattan’s West Side, from the Hudson Yards meatpacking district to Chelsea. It’s built on an abandoned section of the New York Central Railroad that once was used to transport goods to factories and warehouses along the Hudson River.

Following a boom in trucking in the 80s, the railroad line fell out of use. It was abandoned until the late 1990s, when Mayor Bloomberg approved upgrading the elevated rail lines to an outdoor walkway. It’s now lined with horticultural gardens, pop-up restaurants, and sun loungers.

Riverside Park is one of my favorite parks in New York. It’s a four-mile walk along the Hudson River on the Upper West Side, running from 59th to 158th  Avenue. The initial park plan was drawn up in 1870 by Olmsted and Vaux (again!).

Like many NYC parks, Riverside contains several monuments, most notably Ulysses S. Grant’s tomb and the Soldier’s and Sailor Monument.

This city park has many paths and bike paths, including a Cherry Walk named for the cherry trees along the path. You’ll also find playgrounds, a dog park, sports fields, skate parks, and phenomenal views of New Jersey on the other side of the Hudson.

Walt Whitman Park is a small, one-acre city park in Brooklyn Heights. It’s relatively unknown compared to other parks in New York City, but it’s a great place to visit if you want to mingle with locals. They often come here to read, sketch, or simply enjoy some peace and quiet on their lunch break.

The park is named for Walt Whitman, a famous American poet who lived nearby until he died in 1892. In fact, you can visit his former home on Mickle Street, which is now a museum.

You’ll find nice paths, game tables, and benches here, along with an assortment of Whitman quotes scattered across the park.

New York’s oldest suspension bridge hides an urban oasis right in the heart of Brooklyn: Brooklyn Bridge Park. The 85-acre park spans more than a mile along the East River, offering breathtaking views of lower Manhattan and the Statue of Liberty.

Brooklyn Bridge Park is packed with possibilities, from picnicking and sunbathing on the wide, grassy lawn to kayaking and fishing in the East River. There are waterfront walks, volleyball, a sandy beach area, basketball and handball courts, a roller skating rink, outdoor ping pong, and playgrounds. There’s even a rock-climbing wall!

If you feel like a kid, you can take a ride on Jane’s Carousel, an antique 1922 wood-and-glass carousel. It’s housed in a beautiful weatherproof pavilion that was designed by French architect Jean Nouvel. Or for something more sedate, Pier 1 has an amphitheater that’s used for summer movie screenings, concerts, and other events.

When you need to refuel after all that activity, the park’s food court has some of Brooklyn’s best eateries. You’ll find everything from pizza and tacos to ice cream and fresh seafood there.

TIP A seasonal ferry shepherds visitors over to nearby Governors Island, which has its own share of green space to explore.

Just as Central Park is to Manhattan, Prospect Park is the crown jewel of Brooklyn, beloved by Brooklynites for generations. The 585-acre park was designed by the same team who created Central Park: Frederick Law Olmsted and Calvert Vaux.

From the impressive Soldiers’ and Sailor’s Memorial Arch at Grand Army Plaza to the expansive Long Meadow, a 55-acre lake, and everything in between, there is so much to explore within this green oasis. Within its borders are a bandshell, a botanic garden, a zoo, a Beaux-Arts Boathouse, a dog beach, a lake with boating and fishing, sports fields and playgrounds, and the Lefferts Historic House. And of course, there are endless biking, jogging, and skating paths and spots for picnicking.

And speaking of picnicking, bring a blanket because every Sunday the most beloved food truck event in New York, Smorgasburg, has a pop-up location near Prospect Park. The outdoor market fills more than 60 thousand square feet with 50 vendors selling everything from gelato to street meat!

Final thoughts about the best parks in NYC

I hope you found this shortlist of NYC park options helpful. It was hard to pick the best parks with so many to choose from. Still, whether you’re looking for a place to relax, picnic, jog, or play sports, I’ll bet one of them has what you need.

And if not, get out there and start exploring! And don’t forget your picnic blanket. 🙂 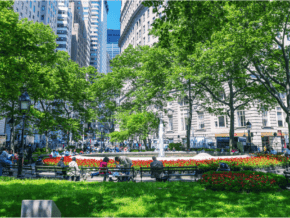 10 Things to Do in New York City in Summer 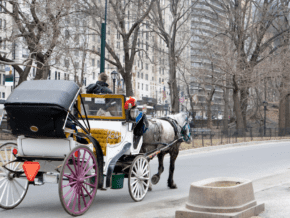 25 Things to Do in New York City in Winter 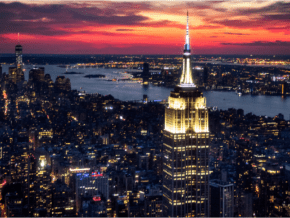 21 Things to Do in NYC at Night