They Actually Make You Go Barefoot in Iraqi Kurdistan 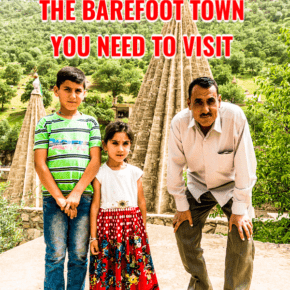 One of the most memorable places we visited during our trip to Iraqi Kurdistan was the town of Lalish. Hidden in a mountain valley with only one road in or out, you might be forgiven for bypassing the unassuming stone village.

What a mistake that would be! Lalish is to the Yazidis what Mecca is to Muslims: a holy pilgrimage site.

Because it has fewer than a million followers, few people have heard of Yazidism. But no matter where they live though, all Yazidis are expected to make a pilgrimage to Lalish at least once in their lifetimes. (Yazidi is sometimes spelled Yezidi.)

Lalish is so sacred that no one is permitted to wear shoes inside the town’s borders.

ⓘ Yazidi is often spelled Yezidi. I’ve chosen to spell it with an a for consistency.

As our guide parked the car, he told us to leave our shoes in the car and put on socks to protect our feet. Maybe the locals were used to the rough pavement, Karwan said, but our tender tootsies weren’t.

True, that. They also weren’t prepared for the blistering hot roadway on this sunny May day. We quickly hopped on tiptoes to the town gate, hoping to find cooler, shady spots inside.

And they were there – under mulberry trees that were dropping their fruit everywhere. I mentally thanked Karwan for suggesting black socks – white ones would never recover from mulberry juice!

ⓘ TIP: Wear a pair of very thick, black socks, because the pavement is rough, dirty, and very, VERY hot.

Once through the gate, it was stone on stone everywhere. And I mean everywhere, from floor to ceiling.

Had it not been for the modern dress of some visitors, we could easily have fooled ourselves into believing we had stepped back in time.

ⓘ TIP: We used a Bradt guide for our trip, entitled Iraq: The ancient sites & Iraqi Kurdistan. Although only a few chapters were dedicated to Kurdistan, It gave us good insights into the country and culture.

Why do people persecute the Yazidis?

As Karwan explained, the prinary reason the Yazidis are persecuted: because many people believe they are devil worshippers. Funnily enough, they actually don’t believe in the Satan we do. Yazidis believe that God’s chief angel fell from grace by refusing to submit to God and bow to Adam. In a way, this is just like the Bible’s Satan or Iblis in the Quran.

And herein lies the problem: this chief angel is an object of worship. Can you see why so many believe the Yazidis worship the devil and feel justified in persecuting them?

ⓘ TIP: The Melek Taus (aka Tawuse Melek, or the Peacock Angel) story is interesting but involved. If you’re interested, you can get the details here.

What do Yazidis believe?

Moving on from the Peacock Angel story (which explained the many bird motifs in town that we saw), like most Middle Eastern religions, Yazidis believe in one god. They also:

Because Yazidism is so hard to understand, it’s little wonder that its followers have been persecuted again and again. This ethnic group has endured genocide over 70 times. In 2014, Islamic State militants declared a “total jihad” on Yazidis, killing entire families, raping the women, and worse.

Lalish is nearly 4,000 years old. It has only one full-time, permanent resident (the Emir). The dozens and dozens of homes in Lalish are vacant, left unlocked and available to pilgrims and refugees who might need them. Yazidis care for their own.

It’s a good thing, too, because we were there in May, 2017, mere weeks before Mosul was liberated from ISIS. Mosul is only 35 miles (55 km) away from Lalish. Most, if not all of the homes were occupied by refugees and the town was as busy as any other might be.

Some other interesting Yazidi traditions and beliefs are:

ⓘ TIP: Be mindful as you step through a doorway. Never set foot on the threshold for any reason, as it is forbidden.

As i mentioned, all Yazidis must make pilgrimage to Lalish. While they can visit at any time, there is a seven-day annual pilgrimage, held between late September and early October.

Even though it wasn’t a pilgrimage to us and we were visiting in May, we wanted to visit the spiritual center and focal point of Lalish, the Sanctuary. This is the shrine-slash-tomb of the great Yazidi reformer Sheikh Adi ibn Musafir, who “balanced the three sects of Yazidi” several hundred years ago. Yazidis believe Sheikh Adi was the possible incarnation of Melek Taus.

The ever-present symbolic peacock is carved on the lintel, and to the right of the entryway is an image of a large black snake. According to one legend, when a live serpent was causing problems for the residents, Sheikh Adi transformed it into something harmless. A man passed us and touched the snake in reverence before entering the Sanctuary.

“You must enter with your left foot first,” Karwan prompted.

So we did. Their turf, their rules.

Once in the Sanctuary’s cool darkness, we found ourselves in a long room, supported by a series of archways that were draped in sheets of colorful fabric. “Yazidis tie a piece of fabric on it to show that they were here.”

To the right, there is a dark pool of water which, I’m told, is the Lake of Azreal, the Angel of Death. As best I could understand, Azreal brings the souls of the dead to this pool so they can be judged by Sheikh Adi and others. I couldn’t help but think he must have been busier since ISIS began its anti-Yazidi persecution.

The shrine of Sheikh Adi

Further on in the Sanctuary, we finally enter the Yazidi Holy of Holies: the shrine of Sheikh Adi. The dim, tiled room held little but his tomb, hidden under a satiny green quilt. The quilt was draped with layers of multi-colored fabric (the seven colors of the rainbow), each tied into knots.

Yazidis go to get their prayers answered here. According to their belief, the Seven Angels can solve their problems. All they need to do is:

When a knot is untied, it ensures that the previous pilgrim who tied the knot will soon solve his problem.

Further on, we found a hidden chamber, full of dozens of ancient clay amphorae. For centuries, the jars have held the olive oil needed for Yazidi religious rituals and for burning in lamps. The room was dank and dismal, its rough walls were charred dark from centuries of smoke.

“You see this rock over here?” Karwan pointed to a bump in the wall. “You’re supposed to grab a cloth, close your eyes, and say a prayer. Then you toss the cloth, and if it lands on the rock without falling off, your prayer will be answered.” We declined, but watched as Karwan demonstrated.

Finally, we made our way out into the bright sunlight and headed to the White Spring, an underground spring and baptismal pool. Two colorful women chatted on a bench outside, and as we approached they eyed us warily. Visitors are permitted to peek through the doorway but are not allowed to enter.

The women were willing to have their photos taken, but It was impossible to get them to smile. That didn’t stop me, though. You can see that their ethnic dress is quite different from typical Arab attire. (Kurdish women have a different fashion style, as well.)

Lalish is full of unique, cone-shaped rooftops,. They are all topped with a round ball which represents the sun shining down on Earth. The pleated sides mimick rays of sunlight.

Little shrines around the community have the same shape.

We met a Yazidi father and his children

I never got a chance to photograph the rooftops, because just as Karwan brought us onto a rooftop with the best viewpoint in town, I saw a pretty little girl, with kohl-rimmed eyes, watching us. Apparently, she found us the curious western tourists with cameras just as interesting as we did her culture!

What striking eyes she has. I wonder if I could get a shot or two….

I stooped down and held out my camera to show her an on-screen image I had taken, and her smile told me that she was fascinated. Moments later, a boy and his father approached. “Karwan,” I called, “would you please ask him if I can take a photo of his daughter? She has such beautiful eyes.”

Papa was proud and happy to oblige. In the blink of an eye, the family was happily posing for us. What a wonderful experience!

Tea with the locals

It was getting late and we needed to get going. On our way out of town, we resisted the temptation to photograph a couple of women with a metal kettle. But then a man called to Karwan from his porch. Karwan stopped and turned to us.

“Would you guys like to have tea with them?” he asked. “They have just invited us.”

Oh, the things that run through your mind when you’re traveling! I’d like to, but do we have time? … I don’t want to do the wrong thing and say no; that might insult him…. Is he asking us just to be nice, but expecting that we won’t accept? Dumbfounded, I gaped at Karwan, not knowing how to answer.

Sometimes it’s good to have a guide. They can walk you through cultural uncertainties like this.

“I think you would like it. How often do you get a chance?”

We nodded. “Then yes, definitely.”

We joined them on the porch and the women brought us some tea. I felt rather awkward sipping tea and smiling silently, but I’m guessing they had the same emotions. Only one person in the family understood any English, and he was too shy to try speaking it.

Karwan came to the rescue and became our translator. As we chatted about their lives, we learned that they were refugees who had fled when ISIS arrived in Mosul. The oldest man expressed his pride in Iraq’s glorious history and that their currency was once so valuable (1 dinar used to buy 3 US dollars).

Let’s hope that it returns to its previous value soon. The Yazidis deserve a break.

See Iraqi Kurdistan as we saw it

Contact our tour guide. Karwan Wahed’s website is iraqikurdistantours.com. Check it out for more about the region.

Read more about Iraqi Kurdistan and the Yazidis 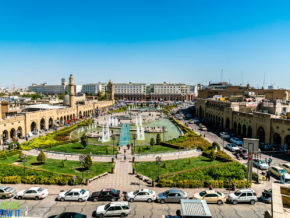 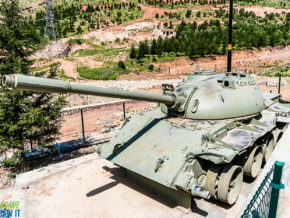 Why We Decided to Visit Iraq

All content copyright © As We Saw It, all rights reserved. Be nice, don’t steal. For more information about using any images or text, send an email to contact [at] aswesawit.com.
191 shares