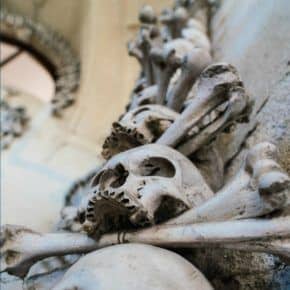 While it may appear to be a rather unassuming town, Kutná Hora is a popular tourist destination, and its most sensational attraction is Sedlec Ossuary, the famous “bone church.”

To be honest, we’re not fans of the ghoulish or macabre and we usually avoid sensational spooky stuff. This, however, was different. It would have been hard to say we’d been to the Kutna Hora UNESCO site without visiting its famous ossuary. So we made an exception: We really had to see this place.

ⓘ ALSO READ: How to Spend One Day in Kutna Hora, Czech Republic

How to get to Sedlec Ossuary from Prague

The easiest way to see Kutna Hora and Sedlec is by taking an organized day trip from Prague like this one.

To get there on your own, there are direct trains to Kutna Hora from Prague. You can also take a bus. Details here.

Most people combine the bone church with a visit to Kutna Hora. Sedlec is a nearby suburb of Kutna Hora, and the distance between the two is only 2.5 km (about 1.5 miles). It’s a 10-minute walk, which is doable.

But a tourist bus is also available. It connects Sedlec with the center of Kutná Hora and the church of St. Barbara. More information about the service is available at the St. Barbara Visitors’ Center and at the Ossuary ticket desk. A ride costs 35 CZK.

The story of Sedlec Ossuary in the 13th century, when the abbot of Sedlec monastery, returned from a diplomatic mission to the Holy Land. He brought back a handful of earth from Golgotha, the site of Jesus’ crucifixion. Thinking to bless the church, he sprinkled it on the consecrated ground surrounding the Chapel of All Saints.

This simple act elevated the churchyard’s appeal so much that – pardon the pun – people were dying to get in. Suddenly this cemetery became a coveted burial place for wealthy and poor people throughout Central Europe.

This worked well until the black plague of 1318, when 30,000 people needed burial there. The ensuing Hussite wars contributed even more, and eventually burial space became hard to find.

The clever abbot decided to make way for newcomers by exhuming the bones of the cemetery’s 40,000 current inhabitants. He took advantage of a basement chapel that had been built on site and the bones ended up there in a big heap until they could figure out what to do with them.

A century later, a half-blind monk was given the task to organize the overcrowded area’s 40,000 remains. With such a daunting task ahead of him, he efficiently piled the various bones atop one another along the edges and corners of the crypt and left room in the middle for the faithful to worship. Those gigantic piles of skulls and bones tower higher than a man can reach.

Those with mobility difficulties should be aware that the chapel is accessed by about 25 rather steep steps. However, a wheelchair lift is available. Once in the ossuary, the area is clear and the floor is smooth.

Anyone who thinks, “Okay, but piles of bones can be seen in ossuaries worldwide,” is not far wrong. That is what “ossuary” means, after all.

Okay, but what makes the one at Sedlec special, and why is it a UNESCO world heritage site? Much of this can be credited to a local woodcarver named František Rint. In 1870 the House of Schwarzenberg, which owned much of the surrounding land, hired him to better organize the bones. Rather than just create more piles, the visionary artist used the various shapes of skeleton bits to create elaborate designs and sculptures in the chapel, as well as assorted garlands of bones and skulls overhead.

The ossuary is still a bona fide chapel. Regular worship services were held there regularly until recently, when the number of curiosity-seekers became too disruptive.

Some of Master Rint’s most interesting creations are:

We were disappointed to find the ossuary’s centerpiece chandelier missing when we were there. A sign said it had been removed for cleaning. I guess it must get really dusty down there.

You can see more shots of both Kutna Hora and the bone art at Sedlec Ossuary in our Kutna Hora photo gallery. 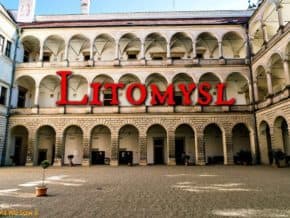