Where to Visit the Real Equator Line in Ecuador 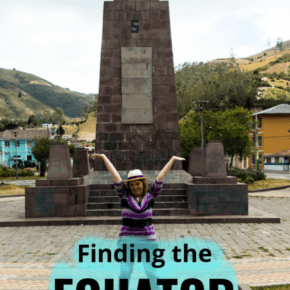 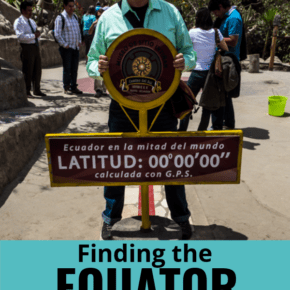 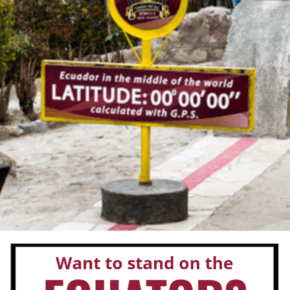 “Take us to the Equator, please,” Dan asked our taxi driver as we threw our bags in the trunk.

“Which one?” our driver asked.

“There’s more than one?” I gasped, incredulous.

“Si.” He grinned at us and climbed behind the wheel. “You want I should take you to the real equator line? You tell me, I’ll drive.”

After muddling through in our limited Spanish we finally worked it out. We would go to three monuments, each one claiming it stands on the real Equator. Good thing they were all close to each other, 30 minutes outside of Quito. He promised our trip would only take a few hours. We’d still have plenty of time to catch our afternoon flight home.

Driving to the Equator

Our taxi driver wound through the capital’s neighborhoods, pointing out landmarks along the way. We passed through industrial districts and residential areas. Some of them might have been questionable, but others were quite impressive. We marveled when he pointed out the president’s ordinary-looking home. Where were all the guards and the vast lawn for protection?

Turning a corner, the city abruptly ended and we found ourselves on a wide highway that would rival any in America. The road twisted and turned down the mountain and we swayed with the car as it took the curves. Suddenly he braked and gestured out the window.

“That is the famous one, Mitad del Mundo. It is where all the tourists go. We will go there, but first I will take you to the real one.”

Seven kilometers up the road we entered a small, nondescript hamlet and stopped at its small town square. “Welcome to Calacalí,” he said. “This is the real Equator monument.”

There, in the middle of the square, stood a short, grafitti-covered obelisk, topped with a stone globe.

I have to confess it was rather disappointing. Save for two dogs, we were the only ones there. This was no tourist mecca; I couldn’t even see a single souvenir shop nearby. And a local was staring at us.

We climbed out to take some cheesy tourist photos anyway. At least the dogs were friendly.

So what’s the story?

This 10-meter-tall monument was the first one, built back in 1936 to mark the equator line. The government moved it here when it decided to build that huge tourist attraction down the road.

Stands to reason; no one else was around. Who knows about it?

This might have marked the middle of the world a century ago, but according to modern calculations and Wikipedia we were standing on a line 164.9 meters south of the true Equator line.

We headed back down the road the way we’d come, and just before we reached the gates to Mitad del Mundo, our driver pulled into a dusty parking lot and pointed to a small museum. “Here is the real Equator line,” he promised. “The one at Mitad del Mundo isn’t in the right place.”

So we paid the $4 admission fee and went in.

Our tickets to Intinan Museum included a tour with an English-speaking guide. She pointed over the wall. “That huge monument next door that all the tourists visit marks a false Equator line. The line behind our museum,” she boasted, “marks the true Equator.” She explained it was determined by GPS after that big super-park tourist attraction had been built next door.

Nope, not according to Rabbi Google. Apparently, the actual latitude of the Intinan Museum is -0.002124 S.

Anyway, we finally ended up at a small outdoor area with a bright red line painted down the sidewalk. We posed on the line (say cheese!), did a few stunts, and checked out the museum.

Back to our taxi. A quick drive around the corner, and he pointed to our final stop.

Have you seen all those cheesy photos of people posing on a bright, red line with a megalith in the background? This is the place: Mitad del Mundo, Middle of the Earth.

This is a mini-theme park complete with gardens, restaurants, and a huge, 30-meter-tall monument. You can even buy a combo ticket so you can climb to the top of the monument and visit the ethnological museum inside.

Can you say touristy?

OK, yeah, it’s a tourist trap … but it’s one of those things that you sort of have to do. After all, in a country named after the Equator, isn’t it sort of expected that you’ll bring home photos of yourself taken with one foot in each hemisphere?

What they don’t tell you: The latitude of La Mitad del Mundo monument is 0°00’08”, placing it about 250 meters south of the equator. But after spending all that money on this place, nobody’s going to tell the tourists that they are posing on a fake Equator line.

We did it anyway. And so did a pile of other people.

Just so you know: The East side of the monument is better for photos. However, when there’s an entire busload of eager Chinese tourists mobbing the area, you might as well cut your losses and head straight to the West side.

Our driver had promised to return in an hour and a half, which gave us time to grab a bite at one of the park’s restaurants. Considering this was a tourist attraction, our meal was surprisingly cheap: two burgers with fries and a large beer to share came to the grand total of $5.

I’m thinking American amusement parks just like to overcharge people because they can.

At the end of the day

As we flew back to Cuenca that afternoon we agreed that searching for the real Equator was a fun way to pass our last morning in Quito. Cheesy or not, those photos are a great memento of our trip and there’s no mistaking where they were taken. Even if we never made it to the actual zero-latitude line.

Not long after, I got curious and did a bit of research. There are actually two points of interest positioned exactly on the Equator: the Catequilla archaeological site and the Quitsato Sundial. Maybe we’ll grab some photos the next time we go to Quito.

In the meantime, it seems Equador’s government is quietly admitting their goof-up. They have plans to build the world’s tallest building, on the actual Equator. I hope they double-check their GPS coordinates before they break ground.

Find a list of our related articles on our Ecuador article page. 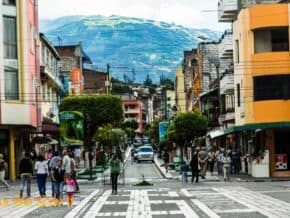 10 Best Things To Do in Banos, Ecuador 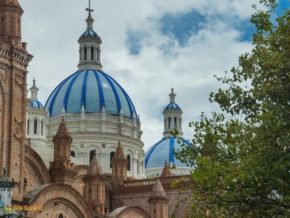 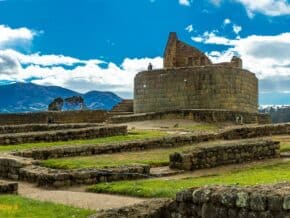 The Day Ecuador Kicked Us Out

All content copyright © As We Saw It, all rights reserved. Be nice, don’t steal. For more information about using any images or text, send an email to contact [at] aswesawit.com.
157 shares