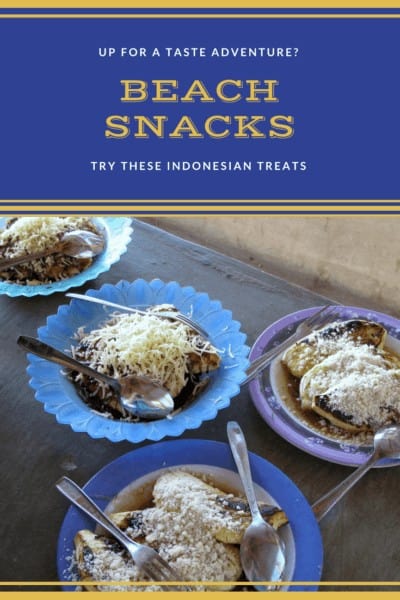 When we moved to Indonesia, we began with a 3-week visit to Kupang, on the island of Nusa Tenggara Timur (NTT). As guests of our friends’ family, we had a soft landing into the country. There’s nothing quite like being shown around by locals, especially when you’re a food lover. Indonesian street food and snacks were new to us, so we had no clue what to eat. Even at the beach.

As the capital of East Nusa Tenggara province (NTT), Kupang is by far the largest city and port on the entire island. However, it’s a big island and there’s a lot of local culture to see elsewhere.

After a few days of doing not much more than hanging out with our Indonesian friend’s family we finally went to Pantai Lasiana. It took me a while to figure out that pantai is Indonesian for beach. One more word to add to my Indonesian vocabulary.

Anyway, some locals had shops set up near the beach. The better to offer their street food and other goods to beach-goers. Our friends shooed us off to the water and told us they would collect a few of the Indonesian snacks that are typical for the region.

So off we went, hoping to find some interesting sea life, because we’d once had a saltwater aquarium with fish from the region. The calm water felt like bathwater, but aside from a few tiny generic fishies skitting about, we didn’t see anything interesting.

I remarked that it didn’t seem as salty as the Atlantic, and Dan said I was right: Each ocean has a different salinity. Who knew?

Far down the beach, we noticed some Muslim women in full garb, swimming fully clothed. I couldn’t help but wonder how long their abayas (gowns) would take to dry and if they’d end up with salt rings around the hems. Or maybe they would soon be laundry…..

It’s funny what runs through your mind when you’re in a new place.

We’d barely gotten wet when Fonny and Vonce (Fawn-cheh) called us back to shore to try some of the treats they had purchased from the beach vendors. One thing’s for sure: this isn’t what you get on American boardwalks.

Vonce had bought grilled bananas for us to try. The first plate of bananas were topped with a sugar syrup and a finely chopped peanuts. As usual, the syrup was far less sweet than what I’d get back home.

Everything seems to be less sweet here. The peanuts were raw, so they had little of that distinctive, peanutty flavor that you get when you roast them. As for texture, the crunch combines well with the bananas’ smoothness.

The second plate of bananas was slathered with chocolate syrup and a mild, white shredded cheese.

I liked this one a lot; the cheese’s tanginess was a nice contrast to the sweetness of the chocolate-banana mixture. I definitely would not have invented that flavor combination on my own, but it’s a keeper.

While we ate, we watched a man climb one of the palm trees on the beach. He had mounted a basket on his back so he could harvest the stalks that grew from the top of the palm.

I asked our friend Fonny what they use it for. This tree is called pohon lontar, she told me, and it produces a rough, leathery-skinned fruit called salak.

Fonny bought some for us to try. The texture is interesting: when I bit down on it, it initially created resistance, but then gave in to the pressure and squirted out its juice from every pore. Kind of fun, and unique.

The long palm stalks are peeled and pressed to produce a sweet liquid called tuak. Like coconut milk, tuak is sweet, but don’t let that fool you. Its flavor is Meh. Without the fun of biting into the fruit itself, tuak is pretty unremarkable.

If you let tuak ferment though, you’ll get arak. I had tried arak before and it tasted pretty good, with just a hint of anise flavor. Of course, we were intrigued. Mental note: Must. Try. Indonesian. Arak.

ⓘ UPDATE: Many restaurants offer arak cocktails, so when we saw it on the menu a few weeks later, we had to try it. Dan thought it was okay, but I didn’t. Nope. Not a fan. Without the licorice flavor, I thought its taste was rather harsh. Rather reminiscent of kerosene. Yuck.

Corn is quite a popular beach food here, though it’s nothing like the juicy, mouthwatering sweet corn I grew up with in New Jersey. For one thing, it’s not as sweet. For another, the kernels are starchier and slightly tougher. It’s quite good, but keep your dental floss handy.

You generally have two flavor options: Plain or Sweet. The plain version comes with a side dish of sambal. As to the sweet version, I’m not sure you can call it sweet.

It’s a shame my tongue can’t handle the searing pain of spicy sambal. Most sambals are homemade, so each has a slightly different flavor. I wish I could try them all.

Also seen at the beach: a kaki lima selling bakso from his cart. The literal translation of kaki lima is “five feet,” because he has two feet and the cart has three.

What is bakso? I hear you ask. Well, it’s an Indonesian meatball. The meatballs are made from ground meat and tapioca starch, and their texture is consistently dense throughout.

Bakso is a very popular, inexpensive dish (around 50¢). They boil the meatballs in water, season the broth, add some noodles, and there you have it, soup. So it’s no wonder there are so many bakso restaurants, warungs and kaki lima vendors selling it.

Bakso is usually made from beef, but it can also be made from chicken, shrimp or fish. You won’t find pork bakso because most Indonesians are Muslim.

Do any of these beach snacks appeal to you?

ⓘ TIP: Learn more about the food of Indonesia in this book.

Places where you can stay in Indonesia 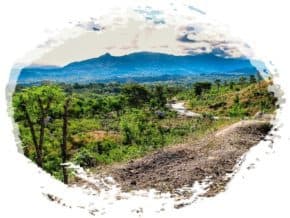 All content copyright © As We Saw It, all rights reserved. Be nice, don’t steal. For more information about using any images or text, send an email to contact [at] aswesawit.com.
131shares