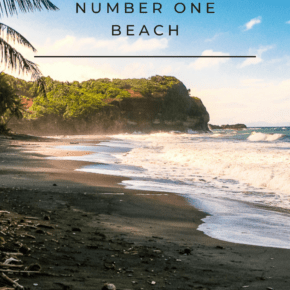 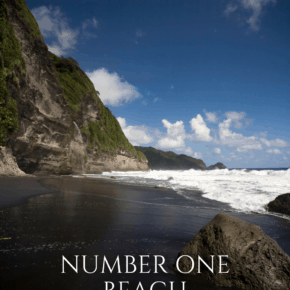 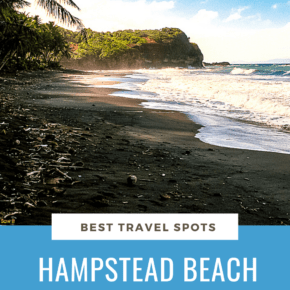 If you’ve seen Pirates of the Caribbean: Dead Man’s Chest, you surely remember the classic scene where Jack Sparrow was chased down the beach by a tribe of outraged natives.

The dramatic scene was filmed at Hampstead Beach Dominica, an isolated spot on the island’s Atlantic coast.

Graphic artists took liberties with the background but, yes, this is it. (Two other film locations on Dominica are High Meadow, where the cannibal village scenes were shot, and on the Indian River, where the characters went to visit the voodoo lady.)

Table of Contents show
Hampstead Beach: Dominica’s best black sand beach
Is this Dominica’s number one beach?
How to get to Hampstead Beach
Fun at the Number One Beach
Want to read this later? Save it to Pinterest!

Hampstead Beach certainly ranks as one of the best beaches in Dominica. But it’s also earned the top spot on Caribbean Journal’s list of best black sand beaches in the Caribbean.

Totally baffling, considering that it’s a remote spot and it takes about 1.5 hours to get to Hampstead Beach from Roseau. I mean, how did they even think to include Hampstead Beach on the list?

Bordered on one side by warm, calm Caribbean Sea and by the cold and rough Atlantic Ocean on the other, Dominica has been shunned by developers. Tourists would hate the rocky beaches along her Caribbean coastline, while over on the Atlantic side where the nice beaches are, the weather is too changeable and currents are often too strong for swimming.

On the plus side, this gives the Commonwealth of Dominica an appeal all its own. It’s relatively untouched, making it the only Caribbean island that Columbus would still recognize. That’s why it’s known as “The Nature Island.”

Is this Dominica’s number one beach?

I never could understand why Hampstead’s other name is Number One Beach. This is one of those nice beaches with changeable weather. What’s worse for developers, rough waves and chilly waters are not what tourists and beach-goers fancy jumping into.

Even those who don’t mind a cold water dip rarely visit, unless they plan to grab their surf foil and catch a few waves.

How to get to Hampstead Beach

We were warned: Hampstead Beach is a bit difficult to find. You see, there’s only one hard-to-see sign along the road to mark the way there.

Once you turn off the road, it’s a treacherous, muddy and bumpy drive down through tropical jungle that only a 4-by-4 should make. If not, you can walk down from the road – it’s only about a 15-minute trip on foot.

If you decide to persevere, you will be rewarded with a lonely stretch of beautiful black sand, fringed by groves of coconut palms and a jungle of mangroves and sea grapes.

Dramatic cliffs climb skyward on both ends of the beach, making it seem remote and tucked away. The hard-packed sand makes it the perfect spot for a romantic picnic or a leisurely stroll.

Adding to the romance of the place, a rugged rock archway stood at one end, constantly pounded by the ocean waves. But sadly, we’ve since heard that it couldn’t withstand the onslaught, and it collapsed during a ferocious storm.

Considering Dominica’s position between the Caribbean and the Atlantic waters, I can’t help but wonder what kinds of sea life a diver might discover around those untouched rocks. But I digress.

Fun at the Number One Beach

At the other end of the beach, we came across one of Dominica’s 365 pristine rivers and discovered a playground. The local children were laughing and splashing in the river’s delightfully warm waters.

As we watched, some of the more adventurous clambered onto a nearby rock outcropping. They jumped, dousing the others with even more water and grinning as they surfaced.

Apparently we weren’t the only ones who think this is an ideal recreation spot!

ⓘ TIP: Visit during nesting season (April to June), and you may see various turtle species come ashore to lay their eggs. 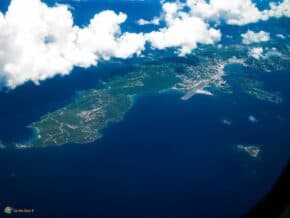 Visiting Dominica for the First Time 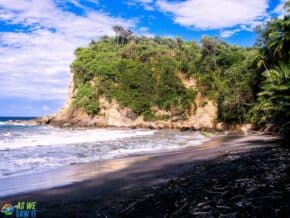 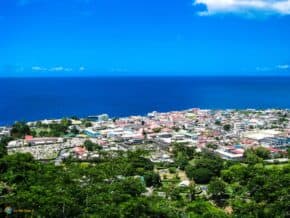 6 Best Things to Do in Roseau, Dominica