Thinking about visiting Ireland? After you do the hop-on/hop-off bus tour, spend some time seeing the city on foot to get a totally different perspective. Yes, most of Dublin’s main sights are in a small, central area, but don’t just walk around solely to see the sights. Stop. See the people coming and going. Watch everyday life in Dublin. And then strike up a conversation with a Dubliner or two. After all, Dublin’s people are what make it such an enjoyable city. Here are some of the things we did recently while we were exploring Dublin’s streets:

Most of Grafton Street is closed to traffic and is one of Dublin’s prime shopping areas. (Parnell Street is the other one.) But in our opinion it’s worth a visit even if you’re not a shopper, because no matter when we’ve gone we’ve always seen people performing for passersby. Tip the more talented ones a coin or two, as we did. They’re working hard for it. O’Connell is a wide thoroughfare and you’ll find people from all walks of life there, many just hanging out, others in a rush, and still others singing and playing their hearts out, hoping for a tip or two.

Guinness isn’t the only tasty local brew; Dublin has its share of microbreweries. Somehow we always seem to end up at this one, and maybe because it’s so easy to see from the O’Connell Street bridge. We each order a flight (sampler) of their current five beers and have a great time comparing what we think about each one. 4. Cross the river on the Ha’Penny Bridge

Officially known as the Liffey Bridge, this iconic iron footbridge is nearly 200 years old. It replaced a ferry and originally cost half a penny (a ha’ penny) to cross. It’s become a favorite site for love locks. (The padlocks that sweethearts lock to a bridge, write their names on, and throw the key into the river, symbolizing unbreakable love.) Hey, you might even see someone putting a love lock on the bridge, who knows? Temple Bar is both a pub and the district that the pub is in. Though it’s probably Dublin’s biggest nightlife spot, it’s also a really great place to visit during the day. You’ll find more street performers here as well as a fantastic selection of pubs and eateries. Temple Bar has a playful, festive atmosphere, especially when the sun is shining, and it’s easy to strike up a conversation with just about anyone. We spent half an hour chatting with a security guard outside the Temple Bar pub and it was fascinating to hear a born and bred Dubliner talk about his city. 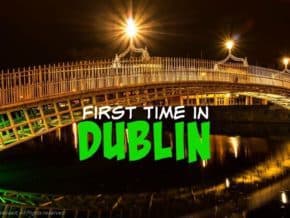 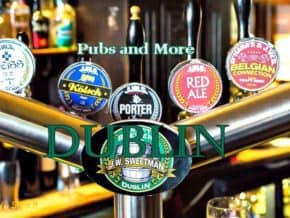 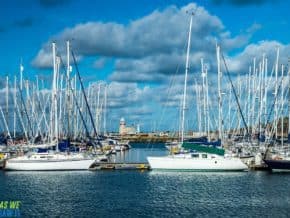 All content copyright © As We Saw It, all rights reserved. Be nice, don’t steal. For more information about using any images or text, send an email to contact [at] aswesawit.com.
144shares