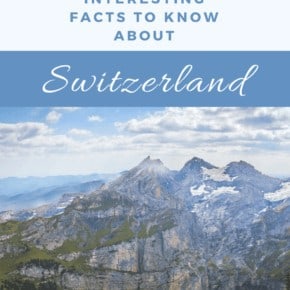 If you plan a holiday in Switzerland you are a very lucky person. Switzerland is one of a kind. Its Alps are spectacular, the lakes are a dream, the snow is perfect during winter, and people here love to make chocolate and cheese.

Switzerland is a model of democracy and was neutral during World War II. The man who invented The International Committee of the Red Cross was Swiss and so was Audrey Hepburn.

But still, this isn’t everything to know before you travel. Here are some more interesting facts about Switzerland that will make your trip even better.

Places where you can stay in Switzerland

Switzerland does not belong to the EU

Although Switzerland is not a member of the European Union member, the country is a part of the Schengen Area. You can travel from EU countries to Switzerland with no border headache.

The currency in Switzerland is not euro, but Swiss franc. However, you can pay in euro in many places in Switzerland, especially near borders or in touristic areas. Even The Swiss Federal Railways accept euro.

Switzerland is one of the few countries in the world where there are four national languages. French, German, Italian, and Rhaeto-Romanic are spoken here. German is the most popular of them, but don’t be afraid you’ll not be able to communicate.

In Swiss schools, the study of languages is very well put together, so many of the people here know at least two or three languages. And because they have to learn a foreign language like any other student in the world, they also speak English.

Trains are the best way to travel around

Take your time when you visit Switzerland. Open any travel book you want and you’ll find hundreds of reasons to visit this country. It is worth walking, so pretty it is. For our modern times, walking it is a courageous option, but driving or taking the train isn’t.

The Swiss Railway will offer you any connection you want, will take you any place you need and will operate like a Swiss clock. It is the world’s most dense railway network and the average of kilometers traveled in a year per inhabitant is over 2, 400. Well, it is not hard to be so good when you’ve started in 1847 (the first internal railway was open in 1847, between Zurich and Baden).

Definitely, the best Swiss perspective is from a train. The train stops in small villages and towns, letting you discover the heart of Switzerland, travel through the Alps and pass lots of lakes. Switzerland has over 100 lakes, some of them among the largest and the most beautiful in Europe (Lake Geneva, Lake Constance, Lake Maggiore, Lake Lucerne, and Lake Zurich).

The first Alpine railway is dated in 1882 and the second in 1906. Many others followed them. Furthermore, Swiss railway was mentioned even in 19th century travel guides.

You have to eat fondue! It’s a must! Fondue is a Swiss dish with melted cheese. It contains several types of cheese and some alcohol and it is served on a heated device. Cold fondue is a sin.

Now, fondue comes with some variety of bread which has to be soaked into the cheese. The rule is to use very small pieces of bread and as much cheese as you can get. The waiter will notice that you are a foreigner after the way you eat your fondue.

Leaving the joke aside, fondue is the best Swiss food (besides chocolate) and it became famous all over the world. The first recipe is dated in 1699. Fondue became popular in the 1930s as a measure of increasing local cheese consumption. You cannot miss so many centuries of food history.

You can picnic how and where you want

If you get tired of sightseeing you can always take a break and go for a picnic in a park. Swiss parks are beautiful, full of colored flowers, with green lawns, and quiet people. Most of them have no regulation against picnics. Bring your blanket and basket, take your time and relax. You can even drink a glass of wine. There is no law to forbid drinking in public spaces and if the park has not other rules, you are free to do it.

Leave no garbage behind. Even if picnics are allowed, there are extremely large fines for throwing garbage in the park.

Before going to Switzerland, you must know that your goal is not to complete a travel guide or a list of things to do. Your goal is to find that peaceful moment just for you. It might be a beautiful Alpine panorama, a boat trip on a lake, an off-piste snowboarding day, a picnic in the park, a minute in front of a Fabergé egg or a forkful of melted cheese. It is your moment and you must find it. Switzerland is offering you almost everything.

Can you add any other interesting facts about Switzerland? Chime in below!

This article was written by Monica Radulescu, savvy travel blogger at asabbatical.com , a personal travel blog of Adrian Sameli. To connect with Monica, follow her on Facebook. 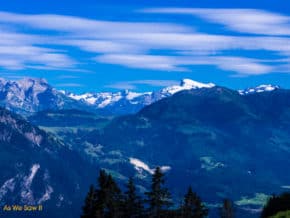 2 thoughts on “5 Interesting Facts About Switzerland”